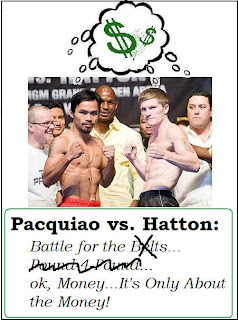 Both Ricky Hatton and Manny Pacquiao made weight for their fight on Saturday night…and if they didn’t…? So what? It’s not like a real title is on the line or anything.

Ricky’s been sportin’ Ring Magazine’s Publisher’s Clearinghouse Title and the Busted-Binary IBO “Computerized Title- two belts that hold about as much prestige as the belts in my closet from before I had a 50-inch waist.

Make no mistake, this should be a nice little scrap and it could prove to be Fight of the Year material, but anyone who tells you that this is even the slightest bit significant is either part of the promotion or on the glue-sniffing “advisory panel” of Ring Magazine.

The only numbers that matter in this bout have nothing to do with PunchStats or physical dimensions…The only important digits here are Ricky’s and Manny’s respective PIN numbers.