I can’t decide if I like Mayweather’s newly coined nickname, “Mainstream Money” better or my nickname for him, “Midget Murderer.” Either way, it’s “M&M” on the personalized robes and spit buckets for Mayweather as he officially announced 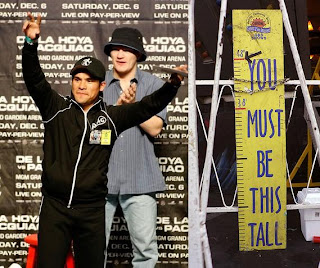 his return today at an MGM Grand press conference in Las Vegas.

The bout between Mayweather and Lightweight King, Juan Manuel Marquez will be contested on July 18th and fought at a catchweight of 143 lbs.
Floyd, in typical Mayweather form, seemed clueless at the impending criticisms that will be hurled his way for fighting a much smaller opponent, “A small man will never retire me. I’m here to stay. I’m here to fight and reclaim what’s mine. I’m the king and nobody has taken my throne.”
The name of the PPV card will be, “Number One/Numero Uno,” but, for those of us who feel that Mayweather has plenty of better fights to be made among fighters his own size, this fight is pure “Number Two.”