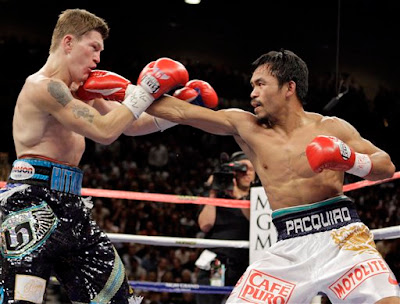 by Paul Magno
Now that the dust has settled and both fighters have had some time to think, it’s time to seriously think about the future.
For Pacquiao, the decision is easy- Floyd Mayweather.
Should “Mainstream Money” beat Juan Manuel Marquez in July, the logical battle would be between Manny and Floyd in a war for “Pound-for-Pound” supremacy. But if business issues can’t be sorted out, Pacquiao’s back-up plans would be a move up to Welter against Miguel Cotto or Shane Mosley or a “stay busy” fight at Jr. Welter against guys like Nate Campbell, Joan Guzman or Timothy Bradley. It’s doubtful, though, that Manny will be taking any fights from now on with less than 8-digit paydays.
For Hatton, retirement would be the best and most logical choice, but we all know that fighters don’t often make the soundest of judgements when it comes to their futures. So, a good choice would be one last mega-fight in front of his Manchester fans- the long-awaited battle between Hatton and Junior Witter.
Hatton/Witter would be huge business in the UK and certainly an HBO-worthy show in the States. The long-standing animosity between the two would charge this event and make it a real spectacle. Plus, frankly, Witter is not a huge banger nor an aggressive warrior. Hatton just may be damaged goods at this point and he wouldn’t do too well against a young, hard-charging contender. Witter is a foe he can beat and make one last big payday doing so.
Both Manny and Ricky, though, have to be patient and see whether Mayweather beats Marquez for Pacquiao and whether Witter can capture the vacant WBC 140 lb. strap against Devon Alexander for Ricky…