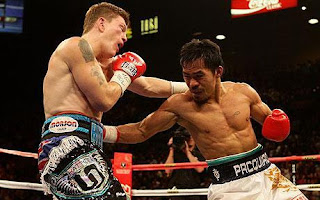 According to CNN and USA Today, early indications from cable companies indicate that the Pacquiao/Hatton PPV last Saturday could end up with as many as two million buys. Initial estimates were firmly placed at the one million mark and some in the industry felt that the economy, combined with the fact that neither fighter was American, would negatively impact the buy rate.

Pacquiao’s promoter, Bob Arum, was more than pleased with the early estimates. “We know based on those early numbers and based on experience the event will perform extremely well. If I had to guess, anywhere between 1.6 million and two million homes, which is a home run,” he said.
If the event reaches the two million mark, it will become the 2nd most bought Boxing PPV of all-time, behind the Oscar De la Hoya/Floyd Mayweather spectacle in 2007, which had a buy rate of 2.15 million.
If the show achieves the low end of the estimate at 1.6 million, it will become #4 on the list of most bought Boxing PPV’s, ahead of the 1.59 million buys of Tyson/Holyfield I in 1996 and below the 1.95 million buys of Tyson/Lewis in 2002.