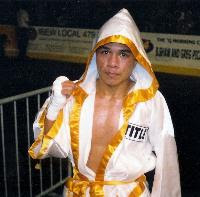 Mexican Super Bantamweight, Benjamin Flores, passed away in a Dallas hospital Tuesday as a result of brain injuries sustained in an NABF title fight the previous Thursday.

The 24-year old Flores suffered a TKO in the 8th round of his battle for the vacant title against Al Seeger. Flores managed to make it back to his corner with help, but had to be taken from the ring on a stretcher.
Flores fought mainly in Texas and had gone undefeated in more than two years since his last blemish- a Unanimous Decision loss to Bernabe Concepcion on the Manny Pacquiao/Jorge Solis undercard in San Antonio’s Alamodome.
His ring record was 19-4 (6 Ko) and, at one point, held the WBC Continental Americas Super Bantamweight title.