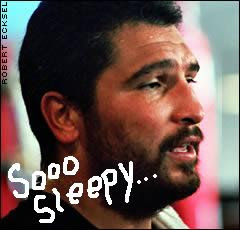 An Open Letter from John Ruiz:
“I’ve been told I’m not the most fan-friendly fighter in the world, my style often criticized as being ugly, but I’m proud to say I’ve never ducked a worthy opponent. For the past month or two, though, I’ve read and heard a lot BS about how I shouldn’t be the WBA mandatory title challenger. A few totally unproven, so-called contenders have whined about them deserving a world title shot more than I do. Why? Who have Chris Arreola, Eddie Chambers, Kevin Johnson or Brian Minto beaten to deserve a world title shot? Nobody!
“Just compare my list of victories to yours. You guys haven’t come close to doing what I’ve accomplished. I’ve been where you’re trying to get – 11 world title fights (2 WBA titles) — and I’m even willing to risk my WBA mandatory title shot next year against the Chagaev-Valuev II winner just to show everyone that I’m entitled to another world championship fight. Prove me wrong. Stop all of the smack talk, try and beat me in the ring – the only place it really counts — to be the real No. 1 American heavyweight.
“Next year, I’ll be fighting for the crown again unless one of you pretenders step-up and change my schedule. Show the boxing world that you’re a true contender, not a pretender. You want it, come and get it – put your money where your mouth is. No more excuses, just contact my attorney Tony Cardinale (your promoters know how), and let’s make it happen.”