The “What If…” series takes crossroads moments from boxing as well as controversial outcomes and, using a computer program, speculates on how some alternate results would’ve impacted both athletes and the sport in general…A big thanks to “Green Machine” from the BTBC Fan Forum for taking the time to amplify a popular message board thread into a solo feature on this blog.

What If…Riddick Bowe had opted to fight Lennox Lewis in 1993 instead of vacating the WBC Title. 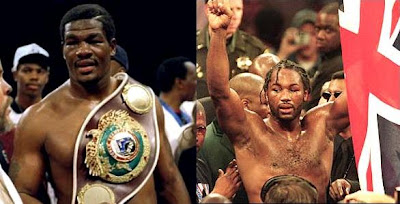 Using the Title Bout Championship Boxing program:(http://www.ootpdevelopments.com/joomla/home-tbcb.html ), I’m running an alternate scenario, where Riddick Bowe meets Lennox Lewis in 1993 after winning the heavyweight crown. Holyfield is on the sidelines, looking for a tune up while trying to secure a bout with the winner. Tyson is in prison, but his name is popping up too as it always does.

Riddick Bowe had just won a grueling 12 round decision, and the undisputed heavyweight crown from Evander Holyfield. Sitting ringside was Lennox Lewis, the British heavyweight who had stopped Bowe in the gold medal match of the 1988 Olympics. Lewis is undefeated and had just demolished Razor Rudduck in two rounds two weeks ago. Ruddock had gone 12 rounds with Mike Tyson less than a year before that, so a two round blow out says something for Lewis.

Bowe and Lewis met briefly at ringside as Bowe was heading back to his dressing room and Lewis calmly stated, “I’m going to knock you out again”. Bowe would have to meet Lewis to retain the undisputed title, Lewis being the number one WBC contender.

Fast forward to mid-January 1993: The fight has been signed. Rather than take an easy tune up and allow Lewis to cool off or even take a huge money rematch with Evander Holyfield, Bowe has decided to meet Lewis and just get him out of his hair for good. Bowe’s confidence is overwhelming, as he and Rock Newman have been boasting to anyone who will listen how easy this fight will be.

When the two met face to face at the press conference in Las Vegas, Bowe, in one of his “best of the worst”Ali impressions even went so far as to state: “I accept the challenge, of the man from U.K, and I’ll return him unconscious, the very next day. I’m gonna drop that man so hard, England will change their national colors to black and blue!”

Lewis was relatively quiet, but made a point of pointing out his Olympic victory over Bowe and said “in the pro’s we don’t wear headgear, so it will be even easier to knock him out this time. ”.