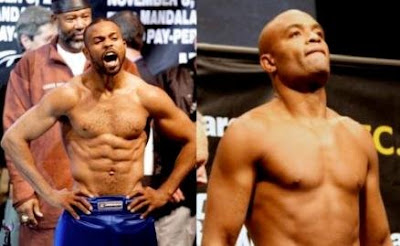 Roy Jones Jr. has verbally agreed…MMA star, Anderson Silva, had already signed off on the idea..so, we’re all set for the first Pro Boxer vs. MMA fighter matchup worth chronicling, right?
Not in this lifetime, says UFC dictator, Dana White.
“You won’t see a Silva-versus-Jones fight while Silva is under contract with me. I don’t want to say anything bad about Roy Jones. I like Roy Jones and was a fan of his, but he mattered, like, 15 years ago. He’s not anywhere near the best boxer in the world. He must’ve spent all his money.”
While Jones is nowhere near his prime, the publicity generated from having one of his MMA guys brutalizing a recognizable boxer would be tremendous…and it would lend credence to the long-standing MMA boast that insists a boxer wouldn’t be able to hang in a UFC octagon.
This would be easy money and easy publicity for the UFC, right?
Unless…Maybe Dana is not too sure that his boasts were correct. I’m sure he understands the public relations disaster that would be generated from a shot and beaten Roy Jones beating a prime and sharp Silva…
Maybe White, and the rest of the UFC goons, are like a chihuahua chasing a pick up truck…Tough as hell on the chase, but be careful if that truck ever stops.