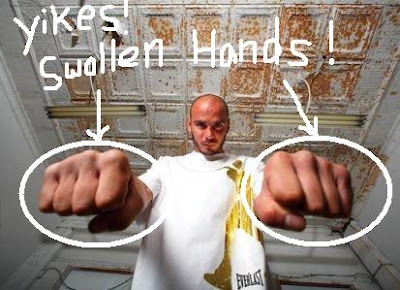 The un-awaited Middleweight title bout between Kelly Pavlik and Sergio Mora was called off today due to a staph infection on one of Pavlik’s hands [see above pic of painfully swollen hands]. The bout will likely be rescheduled for some time in September…or, hopefully, not.
In the meantime, Juan Manuel Lopez will step in and take over the headliner role. A possible move in venue from Atlantic City to New York is also in the works. Lopez’s opponent has yet to be named.
The PPV card will also feature Fernando Montiel vs. Eric Morel and Russian Middleweight prospect Matt Korobov.