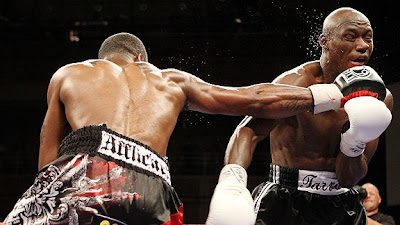 IBF Light Heavyweight Champion, “Bad” Chad Dawson retained his title on Saturday night with another Unanimous Decision whupping of Antonio Tarver at the Hard Rock Hotel & Casino in Las Vegas. The judges had it scored: 116-112, 117-111 and 117-111. The BTBC also had it scored 117-111.

Despite Tarver’s apparent shock that he lost any of the rounds, he was able to have his moments when he pressed…but, unfortunately for him, he rarely chose to press the action. Instead, Dawson used his hand speed and athleticism to pretty much dominate the bout.

The best news coming from this encounter? No rematch clause!