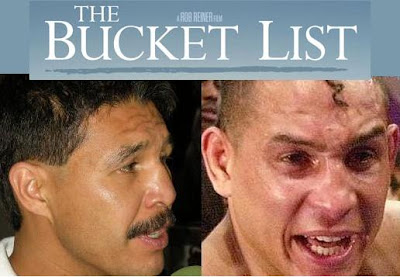 Like any good, arranged exhibition between irrelevant fighters decades past their primes, this bout between Hector “Macho” Camacho and “Yory Boy” Campas ended in a draw. Judges scores were: 77-75 Campas, 78-74 Camacho and 76-76 in the scheduled 8-rounder last night.

The promoter had to scramble for a venue change at the last minute when the New Jersey state commission refused to clear Camacho for the bout two days earlier. But, like most elderly people, Camacho and Campas found their way to Florida…and the PPV was back on.

Camacho went on to add that he plans on fighting two more times. So, Vinny Pazienza and Roberto Duran should be expecting a call soon…