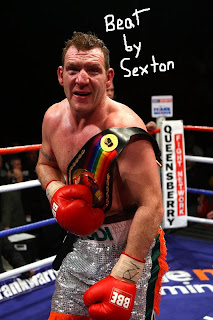 In a thrilling brawl in Belfast, Northern Ireland, Belfast cabbie and defending British Commonwealth Champ, Martin Rogan, was stopped in 8 by Sam Sexton.

Sexton managed to stun the onrushing Rogan several times, most notably in the 2nd and 7th, but what ultimately did in the defending champs was a swollen-shut left eye, which eventually led to the ringside doctor calling an end to the bout in the 8th.

It should be noted that Sexton was literally out on his feet at several points in the 8th, but was able to hold on- Once by pointing to the canvas in front of an oncoming Rogan, which caused Rogan to become confused, put down his hands and get tagged a couple of times by an astute Sexton.

Ref Dave Pariss’ job could also be called into question in that he stopped the action at several points of the bout, many in moments where the challenger, Sexton, was in trouble.

The fight, by the way, was streamed live to members of the BTBC Fan Forum: http://www.btbc.proboards.com/