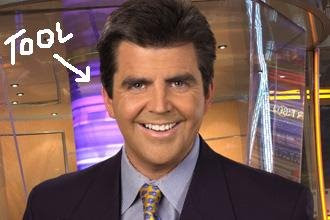 The BTBC has long yearned for a journalist with the bravery, integrity and drive to go after all the evil aspects and shady characters in the sport. Brian Kenny looked and sounded the part during his most recent interview with Floyd Mayweather jr.

However, Kenny missed one key point: He has to be aggressive and self-righteous with all of his guests and not just one guy on two brief occasions in several years as co-anchor of ESPN’s Friday Night Fights.

To just go for the neck against one guy in a career of Regis-style glad-handing and sucking up looks more than shady. It makes Mr. Kenny look like he has a personal axe to grind with Mayweather and it puts into question everything Kenny says concerning all things Mayweather.

The tiff between Mayweather and Kenny started back in 2006 as Mayweather was doing publicity for his fight with Zab Judah and Kenny questioned Floyd’s lack of desire to fight Carlos Baldomir and Ricky Hatton.

Kenny went on the offensive in that interview and smugly challenged Mayweather, “…he’s (Hatton) coming to Las Vegas for his next fight and he’s probably going to fight for the Welterweight title…What will you do then?”

Kenny, in that same interview, would flatly state that Mayweather’s win over Arturo Gatti for the WBC title at 140 was not a real world title win- In and of itself a ballsy statement to make to a fighter’s face, but 100% disingenuous since Kenny never makes those declarations against other guest holding, as he said, “paper championships.”

Kenny has gushed over Pacquiao’s win over “paper champion” David Diaz at 135 and has never challenged an interview subject with accusations of being a paper champion if not holding the lineal title.

Kenny questioned Mayweather’s timing in announcing his comeback on the same day as the Pacquiao/Hatton bout on May 2nd; He pushed Shane Mosley between Mayweather and Pacquiao, almost as though using Mosley to run interference for Pacquiao; And he even, in the matter of just a few minutes, managed to insinuate Pacquiao as the new PPV king and push the Top Rank notion that Pacquiao’s wins over Oscar De la Hoya and Ricky Hatton were infinitely more impressive than Mayweather’s

If you didn’t know better, you would’ve thought that Bob Arum himself, and not Brian Kenny, was conducting the interview.

Mayweather was the same smug Mayweather throughout, but Kenny had obviously been dreaming of the day when he could have a rematch with Floyd and tell him that he was no longer pound-for-pound #1 because Mayweather had “informed Ring Magazine” that he was retiring.

This latest interview with Mayweather made Kenny look extremely bad and the damage it did to his reputation as a fair and even-handed journalist was further highlighted on his Friday Night Fights show where the interview was shown again and Kenny used in-studio guest, Freddie Roach, to affirm his positions.

The contrasted cuts from a smug, passive-aggressive interview with Mayweather to loving glances at Roach, followed by softball questions, was damning evidence that Kenny is simply not someone ever willing to take a fair approach to any topic labeled “Mayweather.”

Worst of all, Brian has to be executing these ambush jobs with the full understanding of what he’s doing. Kenny is not some simple talking suit behind a desk, he does have a working knowledge of the sport.

So, when he attacks Mayweather for not fighting Pacquiao or Mosley immediately after a 19-month lay-off, he has to be doing so with the full understanding that nobody would be dumb enough to take on two of the best fighters in the world after such an inactive period without a tune-up first.

Even if Mayweather’s ego doesn’t permit him to admit that he needs a tune-up fight to shake off the rust of inactivity, Kenny should know that…Either that or maybe Floyd was right and Kenny knows nothing about the sport…Or, also plausible, maybe Kenny has found his way into a specific promoter’s back pocket.