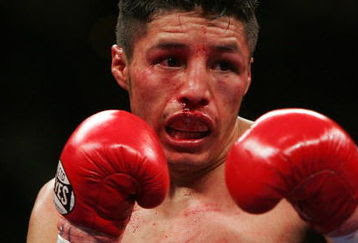 From The Arena Monterrey, Nuevo Leon, Mexico:
There were mixed results for the sold-out partisan crowd packed into the Arena Monterrey Saturday night.
Rafael Marquez (38-5, 34 KOs) took the first step on his comeback trail as he disposed of a tentative Jose Francisco Mendoza (21-3-2, 17 KOs) via third round TKO.
Marquez started off slowly in the first and second, showing obvious signs of ring rust. Then, towards the end of the third, Marquez connected with a sharp straight right hand that sent Mendoza to the canvas. It was obvious that Mendoza was in no shape to continue and, after some confusion between the ref and both corners, the fight was waved off at the 2:26 of round three.
In the main event, Japanese southpaw champ, Toshiaki Nishioka, brought his WBC Super Bantamweight title to Mexico and defended it impressively against Jhonny Gonzalez.
The challenger, Gonzalez, started off extremely strong by dropping Nishioka late in the first round with a textbook straight right hand. The champ, although dropped, didn’t look to be in any grave danger of being stopped.
The second round was a good recorvery round for Nishioka as he managed to box on the outside and nullify Gonzalez’s forward momentum.
The end of the fight came in the third when Nishioka connected with a teeth-rattling straight left hand that sent Gonzalez down hard in the corner. Jhonny managed to get up at the 8 count, but he was obviously out on his feet, prompting referee Kenny Bayless to wave off the contest.
Nishioka moves to 34-4-3 (21 KOs); Gonzalez falls to 40-7 (34 KOs).