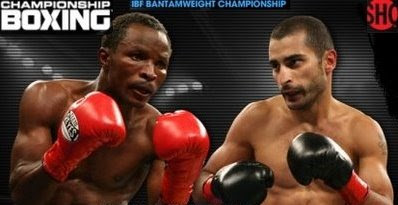 A few fights back, when Vic Darhinyan was scheduled to fight Christian Mijares, I predicted that Mijares would shut Darchinyan out over the course of the fight. My reasoning for this was rooted in what we had seen in the Nonito Donaire fight: Darchinyan is a powerful, awkward, southpaw slugger, but also crude and predictable. It did not make sense that a superior boxer could not recognize the openings and exploit them.

As we know now, this was not the case; but on Saturday night, there was some logic restored to the boxing world as Joseph Agbeko brought a hard fight directly to Darchinyan’s face, defending his bantamweight title.

It should be noted that Darchinyan was moving up in weight; also, Agbeko either possesses a dolemite chin or Darchinyan did not carry his power the three pounds north into the higher weight class. Without his power, Darchinyan has little to offer within the rules aside from his crouching, southpaw style.

Credit should be given to Agbeko, his previous two fights came against southpaws. He performed like a champion, and did everything right—right hands down the middle—all night long—right to a unanimous decision. Those right hands, when thrown the way Agbeko was throwing them are kryptonite to southpaws.

Prior to the fight, Showtime held a survey as to whether or not Darchinyan would capture the bantamweight title and perhaps go further…a surprisingly high percentage said that Darchinyan would win at least 5 titles before retiring. I have a feeling those ridiculous numbers came from the entire population of Burbank, CA. Darchinyan will have to find someone else to get his next title from, because Agbeko wouldn’t cooperate.

→I appreciate Darchinyan’s ability to talk trash prior to a fight. He does it like a pro. When he lost, he praised everything Agbeko did and honorably conceded defeat. Maybe he’s growing up…

→If Darchinyan’s promoter didn’t want anything to do with Donaire before this fight, they most definitely don’t want him now. Some things had been said about Donaire’s camp not wanting to fight Darchinyan; well why should they? They won. That’s like asking Pacquiao if he wants a re-match with Hatton. Unnecessary.