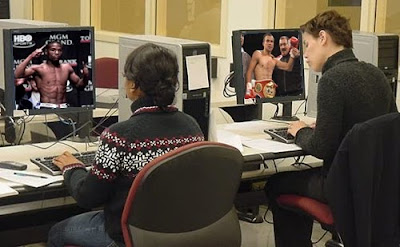 More than a year after officially retiring from boxing, Floyd Mayweather will step back into the ring on 19 September to face Mexico’s Juan Manual Marquez. This 12-round fight is seen as somewhat of a prelude to a potential megafight been Mayweather and Manny Pacquiao, should he get past Miguel Cotto on 14 November. However, this is no warm-up bought for ‘Money’ Mayweather and is a serious test for a fighter that has been out of the ring since a knock-out win over Ricky Hatton in November 2007.

Mayweather’s time away from boxing is unlikely to have that much of an impact on his performance. As we have seen recently from HBO’s acclaimed 24/7 series, he is always in superb condition and always stays on or around the weight for his next fight. In fact, the time spent away from the ring will probably only have done some good. It will have allowed a body that has spent twenty-plus years fighting (especially his famously brittle hands) to recover and enabled the former pound-for-pound king to find out what he really wants to achieve in the sport.

Marquez though is not here for the taking. He is a fighter that puts his Mexican heart and blood into every performance. Despite the fact his last two fights have been at lightweight, he proceeded to knock-out two opponents who had never been stopped – Joel Casamayor and Juan Diaz. Two fighters that look good on any fighters record and arguably make Marquez, at least in some fan’s eyes, the best fighter in the world. In recent fights he has turned from meticulous technician to boxer-puncher, which has certainly made for more entertaining viewing. However, this new style may also be his downfall. Casamayor was able to land clean shots and Diaz forced him to whether numerous barrages of punches. On 19 September, he will be facing arguably the biggest, strongest fighter he has ever faced who is capable of doing damage with both fists.

For this project I have chosen to use Title Bout Championship boxing to simulate what will happen in this upcoming fight. I have updated both fighters to reflect their weight on the night and updated Marquez’s abilities slightly to reflect his recent successes. The simulation as on fight night, will take place in the MGM Grand Garden in Las Vegas. As I do not know as yet, the judges for the fight. I have chosen to have random judging so to be impartial.

I will run six simulation fights and report my results. We will hopefully receive six results and then I will make notes on issues such as the scorecards, the styles of the fighters and conclude with the outcomes. We will then be left with a final result and an overall prediction from the fight. If the outcome proves to be accurate, or at the very least, close, I will run similar simulations for other upcoming fights with Cotto-Pacquiao being the obvious. 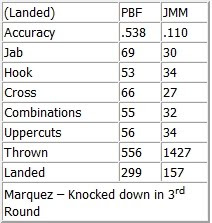 Oddly enough, the first fight produced what is the most likely outcome according to the bookmakers. The story of the bout being that Mayweather overcame a slow start but by the end of the bout had landed with greater accuracy than his opponent. It seems that some of the judges scored some round even and despite a Marquez being knocked down in the 3rd, he still managed a reputable score. This fight suggests that Marquez will struggle to land, come fight night, but seriously – 1427 punches! Even Paul Williams doesn’t throw that many and he never puts his hands down. 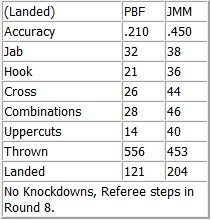 Now, this was a result I was NOT expecting! This time it was Marquez who was landing the cleaner, crisper blows, most notably to the face of Pretty Boy Floyd. This is a complete contrast to the tactics that we expect Marquez to employ come fight night on September 19. This writer predicts that Marquez will focus more punches to the body than too the head, especially given that Money Mayweather had to postpone the fight due to a rib injury. 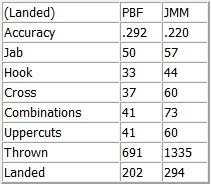 Marquez wins again in a similar fight to the first simulation. The scoring is very close with a two judges calling one round even. Despite Mayweather landing with a greater degree of accuracy, it seems that it was Marquez’s sheer volume of punches that won him the day, ultimately leaving Pretty Boy Floyd with some swelling around his eyes as in fight 2. It appears that this was a fight in which defence was king and consistent attacks were limited. Despite the result not being completely absurd, I think the chances that Mayweather is going to receive some disfigurement to his face is highly unlikely in reality. 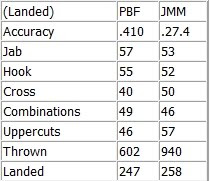 Two judges scored the bout 6 rounds each in a fight that closely resembled the Mayweather-De la Hoya battle back in 2007. Marquez in the role of Oscar went on the attack more but landed on less accurately where as Mayweather succeeded with a similar amount of shots but threw a third less. This was, what can only be described, as a pick ‘em fight. It depends what you like – the aggression and the heart of the warrior Marquez or the slick, clinical moves of Mayweather.

The bigger man scores a shocking early TKO victory late in the third round. Marquez dominated early in the fight, throwing more punches and landed with one in every three punches thrown. Suddenly he gets caught with a Mayweather right hand hook which catches Marquez square on the chin. He falls back into the corner and Mayweather pounces and Marquez is unable to respond. The referee belatedly steps in to pick up the fallen warrior. This outcome is a genuine possibility if Marquez finds himself outgunned come fight night. Marquez will need to prove he can cope with the new weight and take a punch from Mayweather – who despite not being the biggest puncher at 147lb, still has knock out power in either hand. 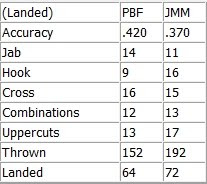 Mayweather stops Marquez for the second time! Similar to previous fights, Marquez was the aggressor, throwing 300 more punches than Mayweather by the end of the bout. However, again it was the Pretty Boy who landed with a far greater degree of accuracy. Moreover, as with fight 5, the Mexican was ahead on the unofficial scorecards going into round 10 and looked to be heading to a close decision, but again he was caught napping and was subjected to another right hand from Mayweather which caught him flush in the chops and led to his eventual demise. This outcome is a real possibility and one which Boxing Monthly have predicted will happen, albeit with Mayweather ahead in the scorecards. 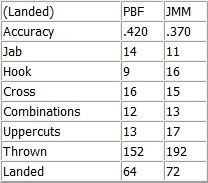 Mayweather in reality is the clear favourite because of his size (or rather Marquez’s lack of it!) and his superior skill set. However, looking to the results, we can see this is a close fight. Mayweather eventually won the day, gaining three victories to Marquez’s two with one majority draw. In addition, Pretty Boy Floyd’s victories were more decisive – 2 TKO victories and a UD to Marquez’s TKO and a SD so we can see that the bookies odds of 1/4 for the American are accurate when simulating the fight.

What the game has also established is the tactics for the fight. It appears that Marquez will be the aggressor and Mayweather will happily sit back and pick his punches in his traditional style, and then taking his opportunities to try and stop Marquez when he gets the chance. Largely running in accordance with both parties’ previous fights to date.

There was only one rouge outcome, that coming in fight 2 with Marquez winning a TKO victory, something which is not even being considered by the likes of Teddy Atlas. In addition, its appears that Marquez is often throwing far more punches than he does in reality. The perfect example of this came in fight 1 in which he threw in excess of 1400 punches! The results despite these 2 statistics seemed to have followed opinion and are at least in my eyes, fairly realistic

Overall, the results were particularly solid with only one really rouge outcome. In most fights Mayweather was the more accurate puncher and won more bouts than he lost. However, the idea that Marquez will be steamrolled, was only seen in 1 out of 6 fights we simulated.

Therefore, I can only conclude that what you see in these results, is what you will get. The chances are, it will be a close fight, but don’t be surprised if Pretty Boy Floyd’s accurate punching eventually takes its toll on Marquez and he is stopped by the referee late on in the fight.

Overall prediction: Mayweather by UD or late TKO. Marquez puts on a brave but unsuccessful showing.

The game has shown to provide us with fairly accurate and clear results, largely reflective of boxing writer’s opinion. Come September 19 we will see how accurate they are in reality. However, because boxing is just that – reality – anything can happen…and it usually does.