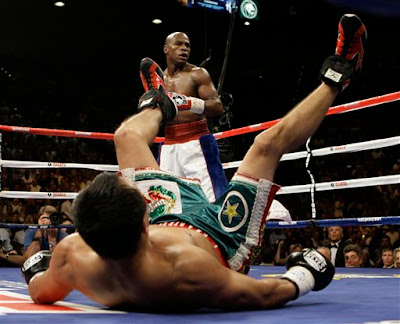 Juan Manuel Marquez never got going. He was never in the fight. It was his first fight at welterweight and he came out of his corner and tried to sustain a jab against the former pound-4-pound king who was making his comeback after 21 months sitting in his armchair. The questions had been asked. Was Mayweather ring rusty? Was Marquez’s size a factor? Did Marquez have the style to upset the odds? By the end of the night, they were all answered.

Mayweather 146, Grand Rapids, MI, had looked unbeatable before his retirement from the sport and, against Marquez 142, Mexico City, the second best fighter on the planet, made Marquez look like a club fighter throughout their contest at the MGM Grand, Las Vegas.

In the second round, ‘Dinamita’ landed a sharp right hand which got Mayweather’s attention, but ‘Money’ was both unflustered and unscathed, and came back with a left hook himself that floored the Mexican. The instant Mayweather started to slip Marquez’s punches, the Mexican was helpless.

As Marquez recovered from the knock-down, he was on the receiving end of an increasingly deflating beating. Still, few, least of all Marquez, were prepared for the manner of defeat that was administered. It was a master-class in defensive counter-punching. It was impressive but not as compelling as the bout that was hyped. Mayweather didn’t throw half as many punches as Marquez but landed more. He frustrated and punished the Mexican through 12 rounds. The scores were lop-sided, 120-107, 119-108 and 118-109 all to the favour of the returning king.

“Marquez is tough as nails. He’s a great little man. He was really hard to fight, and he kept taking some unbelievable shots. I’ve been off for two years, so I felt like it took me a couple of rounds to really know I was back in the ring again. I know I’ll get better.” Mayweather 40-0 (25 KOs) said to Max Kellerman after the fight. A tired and deflated looking Marquez 50-5-1 (37 KOs) replied, “He surprised me with the first knockdown. He hurt me in that round, but not any other time. I don’t want to make any excuses, but the weight was the problem. He’s too fast. When I hit him, he laughed, but I knew he felt my punches. We tried to work the speed, but the difference was the weight.”

But Mayweather didn’t do much good for himself. He did what everybody expected him to do. He outclassed a smaller, slower Marquez. He took no risks. He had Marquez hurt and never tried to finish him off. Boxing lacks superstars that could take boxing to another level, somebody that shocks fans every time he fights. Like Bolt in sprinting. Like Federer and Nadal in tennis. Like Schumacher did in Formula 1. Mayweather doesn’t shock. He’s impressive but not jaw-dropping. His skills are remarkable and had the quality last night to probably force referee Tony Weeks to bring the contest to a halt.

Where next for both fighters? Marquez has probably lost his chance of a rubber match with Pacquiao and retirement beckons. He could challenge Edwin Valero, the Venezuelan knockout artist. Another option is challenging against the top of the ever-deepening light-welterweight division. A bout with Amir Khan could be possible as Roach is scouring for a big name fighter past his peak to propel Khan further up the ranks. Or a fight with Paulie Malignaggi or Nate Campbell in Mexico City, in a last bout in front of his home crowd before retiring.

Mayweather on the other hand, can cherry-pick his next opponent. Shane Mosley exchanged words with ‘Pretty Boy’ after the fight but Mayweather is looking for easy money. A bout between the both is a possibility. It’s an interesting match-up that could enhance both fighters’ legacy. But a bout with the winner of Cotto-Pacquiao is what the public want. If Pacquiao wins, then pay-per-view records could be shattered. The contest between the two pound-4-pound kings could be what boxing needs to get it back with the popularity of the 80’s. A bout with Cotto would be a closer contest with two legit welterweights. With the ghost of Margarito tap-dancing in his mind, could Cotto pull through a tough fight with Manny? Two things that stops the bout happening is the purse bid. In a contest of pride, they refuse taking a 50-50 deal and both claim they deserve a 55-45 split. Surely a winner takes 55, loser takes 45 is the easier option? Also, Mayweather holds a grudge against Pacquiao’s promoter, Bob Arum. This could be the biggest reason why the fight wouldn’t happen. A matchmakers dream would be Pacquiao – Mayweather in March/April and Mosley – Mayweather November/December. Shame that boxing isn’t as simple as that!

With Filipino Manny Pacquiao trying to fill the void that Oscar De La Hoya left when he retired from the sport, boxing still craved for ‘Money May’. His performance against Juan Manuel Marquez proved that he’s as good as new. With Pacquiao facing Puerto Rico star Miguel Cotto on November 14, and Shane Mosley possibly facing a risky bout with Joshua Clottey on boxing day, Mayweather must do the right thing for his legacy. He could fight John Ruiz and still make money, but if he wants to be ‘the best’ he needs to fight the winner of Pacquiao-Cotto, or Mosley if he comes through a tough contest against underrated Joshua Clottey. One thing we learned from September 19 is that Mayweather is back.