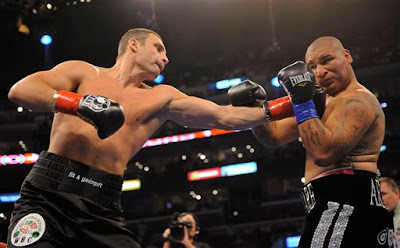 With a dominating performance forcing an opponent to submission, reminiscent of the red army’s recent disposal of Georgia, Vitali Klitschko, 252, Kiev, Ukraine but residing in Los Angeles, California, held his WBC belt up high and proud in front of Chris Arreola’s, 251, Riverside, California, home crowd at the Staples Center. Our admin Paul Magno, wrote on our board, “Talk about one sided.”

And the current heavyweight champion will be in no mood to argue after another emphatic demonstration of the class and composure contained within the Klitschko family.

Within minutes the gulf between the pretender and the consummate professional ensured the Ukrainian’s superiority counted for his fourth defence of the WBC belt.

He returned to the summit of the heavyweight division, alongside his brother Wladmir after an emphatic victory over Chris Arreola, who was aiming to become the first ever Mexican-American heavyweight champion.

And if Klitschko’s managers were sending a message to those who deliver the first ballot award at the Hall of Fame, it was nowhere near as resounding as that sent by the champion to those hoping to strip him of his crown.

On tough territory regarded as Arreola’s home crowd, Dr Ironfist made it as joyless night as the Nightmare’s fans could have endured on home turf. Arreola’s corner was at least hanging on to the precipice by their fingertips, hoping that Arreola stood a punchers chance until Vitali dominated the 10th round with countless power-punches finding their mark on Arreola’s whiskers. Chris Arreola’s trainer Henry Ramirez pulled the plug after a one-sided 10th round that one judge scored 10-8 to Vitali.

Dan Goosen, Arreola’s promoter, magnanimous in defeat and fully accepting the class of Vitali, said at the post-fight press conference “Klitschko boxed a brilliant fight. He never stopped moving or punching. We didn’t think he could move and punch as much as he did.”

Arreola was overcome by the emotion of his one-sided defeat to Vitali. “I let everyone down who came here to see me, I let my people down. I guess all those internet sites that said I’m a fat, lazy mother f***** were right.” I hope he wasn’t referring to the Boxing Tribune as I wouldn’t like to meet Arreola in a dark alley although I reckon he wouldn’t catch up with me.

It wasn’t that Arreola is a lazy mother f***** or that he’s a tad overweight, it was the sheer class of Klitschko that made him frustrated. It was Vitali, however, whose mixture of tactical simplicity actually made the difference. He showed again that while the footwork and hand speed might’ve dimmed; there is still no substitute for maturity and simple jabbing, common sense within Emmanuel Steward’s template for success.

If Arreola is to fulfil his potential, he should keep Klitschko in his eyeline for as long as his glorious career continues. When people say “He’ll never be a heavyweight champion” and “He’ll never be as good as Klitschko” Arreola should find motivation and realization by proving his slightly harsh critics wrong. They might be spot on. There is undoubtedly a world-class fighter lurking inside Arreola trying to get out, but the impression is that he isn’t spending enough time on conditioning, like most heavyweights. The Klitschko defeat should provide enough that much needed motivation.

It is a tribute to Klitschko’s longevity that how long he can maintain this rich domination, he was 38 in July, and still plays a major role in heavyweight boxing. He is a credit to himself, Ukraine, and the sport he has graced since making his debut against Tony Bradham in November 1996.

This was an ominous night for those who slightly questioned Klitschko’s resolve and wear and tear. I predicted a Klitshcko stoppage and he duly delivered.

It was horrible viewing, but not in the way Arreola wanted as he was ultimately outclassed. You could even hear a pin drop after about 2 rounds, a sure sign that something was not quite right at the Staples Center. They might be boring, it might even be ugly viewing, but the frustration of knowing that both Klitshckos could easily step up a gear like they have proved against Lennox Lewis (Vitali) and Samuel Peter (Wladmir). This is what boxing fans are craving for. Pure heart. The heart that Arreola showed last night when he sobbed after Ramirez stopped the contest.

Klitschko negated any possible impact of Arreola’s full-on physical approach, laced with a measure of skill and it should be stressed some head movement to compare with Samuel Peter and Juan Carlos Gomez who just froze.

Arreola spent most of the game being pushed back into his own corner and the only obstacle standing between Klitschko and a quicker stoppage was his own flawed tactics. Klitschko should have forced the referee to stop it, not force the corner. And Arreola’s hopes of getting at Klitschko’s stamina and injury proneness, exposed by Chris Byrd and what ultimately forced him to retire from the sport, failed to get off the ground as they were starved of any control in any areas of danger.

I still feel Vitali needs some sort of X Factor to top his brother. His brother’s performance against Ruslan Chagaev was pound-4-pound quality and showed the gap between them and the rest. I’m getting a bit fed up, especially The Ring, who slate a more defensive approach, because they didn’t match their level of excitement or high level of satisfaction. Floyd Mayweather Jr. returned last week and humiliated Juan Manuel Marquez in a counter-punching master-class. Because Mayweather didn’t charge at Marquez like a mentally challenged rhinoceros that had been released from captivity for the first time, it wasn’t good enough. Excuses and accusations are thrown for no reason.

I still have my suspicions over the course of next year that Vitali can carry on controlling opponents in this manner, but this was compelling evidence to support the theory that writing off a ‘Klitschbot’ remains one of boxing’s most dangerous occupations.

Can Vitali handle David Haye, or his next opponent American Kevin Johnson, a much quicker and more agile opponent?

Time will tell. But this was impressive stuff and a clear signal of intent to their rivals. Will Mama Klitschko ever give her blessing and a major treat for boxing mainstream? Don’t count on it. But with performances like that, success will always be brought to the Ukranians.