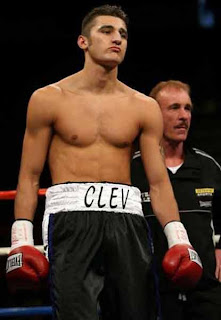 Former Olympian Fry, 34, recently suffered a points defeat in his last outing to Tony Oakey in the light-heavyweight Prizefighter tournament. Nathan Cleverly 17-0 (7 KOs) won the vacant Commonwealth light-heavyweight belt against Oakey in a 12 round unanimous victory. The Cardiff University maths student then added the British title to his collection with a stoppage victory over Danny McIntosh in July. Cleverly has always declared his interest in claiming the Lonsdale belt outright before moving on to world honours.

“It’s been a big boost being nominated for the European title. There’s only one fight that I’m focusing on at the moment and that’s my next one. Obviously it’s up to my promoter Frank Warren who I fight, but if he thinks the European title is the way to go then I’ll bite his hand off if he offers me that fight.

“My ultimate aim is to win a world title, but I’ve always wanted to go the traditional route o winning British, Commonwealth and European titles before I get there. I’ve got a few options at the moment and I’m excited about what the next 12 months will bring.”

Nathan Cleverly was recently edged to the Britain’s boxer of the year to Sheffield welterweight Kell Brook. Only one vote separated both undefeated fighters in prestigious Boxing Writers’ Club award.

Cleverly and Fry fight out of an orthodox style and Cleverly holds a 2-inch height advantage. If ‘Clever Boy’ wants to continue his knockout streak, his body shots will be key. My prediction is that Cleverly would win a shutout unanimous decision.