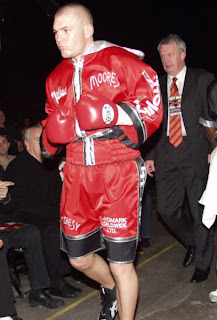 The winner of what is arguably the British domestic battle of the year between two light-middleweights Jamie Moore and Ryan Rhodes, will be taken one step closer to a world title.

The massive excitement surrounding the contest has gone up another level with the news that the WBC has granted the fight as an eliminator for Sergio Martinez’s world crown. Jamie Moore’s European light-middleweight title will also be on the line when the pair meet in October.

The match will be staged at Bolton Arena later in October, with Salford’s Moore ranked third and Rhodes seventh in the WBC’s rankings. Moore is ranked #8 with The Ring Magazine and at #10 with the BTBC’s own professional ranking system.

Moore’s manager Steve Wood and promoter Frank Maloney are hoping that a victory for Moore over Rhodes could propel him towards a straight shot at Martinez or at a final eliminator against mandatory contender Julio Cesar Chavez Jr.

“I have lobbied the WBC and it is great that they are getting behind British boxing,” said Maloney. “If Jamie wins he will go to the WBC convention in Jeju, Korea in early November and try and get him the fight he dreams of. This fight is already potentially the domestic fight of the year, but this great news from the WBC makes it even bigger. No wonder tickets are flying out of the door.”

Julio Cesar Chavez Jr. is using his father’s name to his advantage, earning many pay-checks fighting overmatched fighters. He will get the chance to show the world what he’s made of on the undercard of Pacquiao-Cotto on November 14. Many believe he has the potential to be a champion, but his lack of experience against quality boxers may prove to be his downfall. A fight with ‘Mr Excitement’ Moore, could prove his doubters that he has the ability to beat a world level fighter at 154 lbs.

Many felt that current WBC champion Sergio Martinez won his controversial battle with Kermit Cintron when the pair met in February. The bout was scored a draw, and had one of the weirdest rounds in boxing history when the bout looked to be stopped but was overturned and restarted with all sorts of confusion in the ring. Martinez is currently on a different scale to Chavez Jr, but there are similarities between Martinez and Moore’s styles, which could make a bout between both boxers an ever more intriguing challenge.

The last thing we want is another WBA light welterweight saga with more than three fighters claiming to have the right to challenge for the title. WBC should set the record straight with both camps. Is Chavez Jr. ready for the major step-up in class? Is Martinez-Moore the most exciting match-up at 154? Or is there more money in Chavez Jr.-Moore?

Discuss this topic on our forum: Here