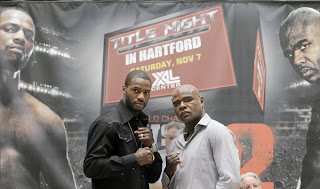 Yesterday, Chad Dawson and Glen Johnson participated in their WBC’s 30-day mandatory weigh-in before their light heavyweight rematch. Dawson tipped the scale at 185 pounds in Las Vegas at his training camp. Johnson weighed in at 181.6 pounds in Miami. The WBC light heavyweight limit is 175 pounds.

“I was 185 and that was with my clothes on. Everything’s good. I’m ready to take on Johnson and put to rest this idea that he should have won the last fight.” Dawson said after his sparring session.

Johnson weighed in at 181.6 pounds at Thump Fight Gym and Fitness Center in Miami. “I think Chad knows I mean business by coming in at 181.6 pounds 30 days out,” Johnson said. “I can’t wait. I am ready for this fight and I am taking it very seriously. I feel great. Let’s get it on.”

Leon Margules, a director in the promotional company of Johnson said “He looks spectacular. He is way ahead of where we expected him to be. I asked him before the weigh-in how much he weighed and he thought 185 pounds. He is just healthy, training and in tremendous shape. The last time he was 30 days out from a fight he was 188, 189 pounds. It shows how serious he is taking this fight. It’s life or death to him.”

If this fight is half as competitive as the first bout, we should be in for a treat. The winner is expected to face off against the winner of the highly anticipated rematch between Bernard Hopkins – Roy Jones Jr. in 2010, with a massive pay-check on the line and a fight that will determine who is king at 175 pounds.