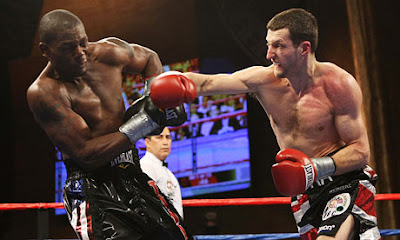 The answer to the question posed in the title of this story is No….and Yes.
For anyone who has read my writings before, you know that I’m not one to walk the fence…and I have the bitter online arguments to offer as proof.
But on this subject, there cannot be any real definitive answer; The issue is just too complex and the answers, too simple.
On a pure merit basis, Jermain Taylor does not belong in a tournament to determine the best Super Middleweight in the world. With only two fights at 168 lbs. and zero wins, he really has no right to be listed among the top six in the division, but, neither does Arthur Abraham.
The former IBF Middleweight champion from Germany, has only fought once at the Super Middleweight limit in four years. If you exclude Taylor on the basis of not belonging, Abraham must go too.
However, when putting something together on the scale of this tournament, some other factors have to be taken into consideration. Name recognition, drawing power and promotional affiliations have to enter into the selection process…It’s in this area where the answer to whether Taylor belongs is a big “yes.”
Showtime, the host of the tournament, primarily wants to reach their home market of US television sets. Jermain Taylor, for better or worse, easily has more name recognition among casual US fight fans than any of the other five tourney entrants.
While Robert Stieglitz, Sakio Bika and even Allan Green are more deserving of inclusion, Showtime has to pay attention to the basic responsibility and goal of putting butts in front of the TV to watch their programming.
Showtime could’ve included IBF Champ, Lucian Bute and Librado Andrade instead of Taylor and Abraham, but Andrade is with Golden Boy and the folks at GBP also won the purse bid on the upcoming Bute-Andrade rematch, effectively securing the bout for HBO.
So, Taylor is in and so is Abraham, another recognizable name who will bring some ratings to the battlefield.
It’s only fitting that Taylor and Abraham be matched up against one another in the opening round of the Super 6 Tournament on October 17th. Aside from fighting for position in the 18-month battle for Super Middleweight supremacy, they’ll literally be battling to see who really belongs there.
Discuss This Topic on The BTBC Fan Forum…Click Here
Your Ad Here