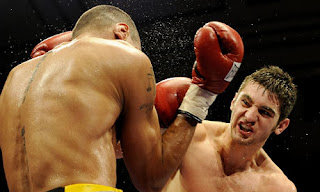 Heavily favoured Welsh light-heavyweight Nathan Cleverly 18-0 (8 KOs) retained his Commonwealth and British belt with an eighth round stoppage victory over spoiler Courtney Fry 13-3 (5 KOs) at the York Hall. Fry is a 3 time ABA champion and won gold at the Commonwealth games in 1998 and was by far Cleverly’s biggest test since his unanimous decision victory over Tony Oakey last year.

With his all-action style and increasingly apparent talent, Cleverly, 174, Cefn Fforest, Wales, is gradually emerging as a world class light-heavyweight. In this bout, headlined by the Cardiff maths student, Fry, 173, Liverpool, England, proved to be a sterner test for Cleverly than expected, as he competed for seven rounds against the unbeaten prospect.

Early in the first round, the ‘Clever Boy’ was catching Fry with forceful shots and nailed Fry with uppercuts. The story was the same in the second round as Cleverly dictated with his longer reach and much quicker reflexes than his opponent. Fry, who hadn’t fought since his 3 round points defeat to Tony Oakey in February’s Prizefighter, began to land his jab in the third round successfully, and began to make things difficult for Cleverly.

In the 5th round, the most exciting round of the contest, Fry landed a wild left hook which got Cleverly’s attention before backing him up into the ropes with uppercuts and right hands. Later on in the round, Cleverly’s powerful body shots found their home on the former amateur champion’s waistline and his uppercuts grazed Fry’s chin on many occasions as they brawled in a competitive round.

The Welshman changed tactics and negatively jabbed his way to win the 6th and 7th round before he wasted little time in finishing Fry off in the eighth. The 6’3’’ student waded in and landed several right hands which staggered Fry before the referee Victor Loughlin made the right call by halting the contest at 2:51 in the 8th round. The champion was comfortably ahead on points before the stoppage came, winning every round bar one on every judge’s scorecard.

Nathan Cleverly has recently been nominated to fight for the European trinket against Italian Antonio Brancalion. Cleverly’s promoter Frank Warren, suggested December the 5th as a date that could see Cleverly come an European champion. The big question still remains, Is is too early for Cleverly to step up? Brancalion was recently stopped by Juergen Braehmer in the 1st round.

On the undercard, heavyweight Derek Chisora 11-0 (6 KOs) made his comeback from a biting ban by stopping Zurab Noniashvilli in the third round. Middleweight prospect Billy Joe Saunders 4-0 (3 KOs) won on points against durable opponent Alex Spitko.