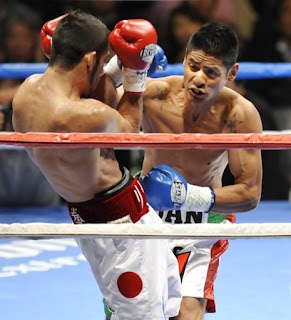 Juan Carlos Salgado (22-0-1, 16 KOs) shocked the world, and probably shocked himself, by knocking out well-regarded WBC Super Featherweight champ and recent Golden Boy signee, Jorge Linares (27-1, 18 KOs) in less than one full round in Tokyo.

The Mexican, Salgado, landed the decisive blow (a left hook to Linares’ temple) just 44 seconds into the first round. The defending champ went down and was able to beat the count, but was on shaky legs. About thirty seconds later, after Salgado pounced on an injured Linares, the ref was forced to call an end to the contest.

On the same card, Japan’s defending WBC Super Bantamweight champ, Toshiaki Nishioka, forced Mexico’s Ivan Hernandez to retire with a broken jaw after the third round.