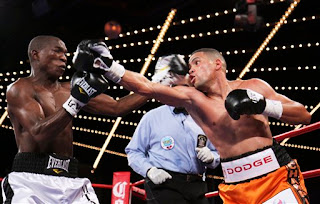 Latin Fury 12, New York- WBO Jr. Featherweight champion, Juan Manuel Lopez (27-0, 24 KOs) wouldn’t know what he was really in for until the seventh round of his fifth title defense against Rogers Mtagwa (26-13-2, 18 KOs) in Madison Square Garden on Saturday night.

From the signing of the fight, right through to the first half of the encounter, this was thought to be just another step for Lopez; A way to pass the time while bigger bouts presented themselves. Some were even openly criticizing Lopez and his promoter, Top Rank, for fighting such a soft touch.
Somebody forgot to tell Mtagwa that he was just another victim.
The first half of the fight played out like many of Lopez’s fights. He was in command and hitting Mtagwa with some big shots. Unlike most of his fights, though, Mtagwa wasn’t going down. As a matter of fact, he was getting stronger as the fight went on. Despite suffering a knockdown in round five, the warrior from Tanzania kept things close and, instead of getting worn down by Lopez’s heavy hands, it appeared that the one being ground down was Lopez.
The second half of the fight was controlled by Mtagwa. At several points, Lopez seemed to be stunned by Mtagwa’s wild punches.
The twelfth round was a nightmare for Lopez and his first real gut check as a pro. Following a near knockdown at the end of the eleventh, Lopez had to deal with a a charging Mtagwa in the final round. Lopez was out on his feet, clinching desperately for the full three minutes while his challenger attempted to close the show.
The defending champ miraculously made it to the final bell and ended up winning a unanimous decision based on his work in the first half of the fight. The scores were: 116-111, 114-113 and 116-111. The BTBC had it 115-112, also for Lopez.
After the bout, promoter Bob Arum skated around the topic of a rematch for Mtagwa and mentioned the names of Featherweight champs, Steven Luevano and Elio Rojas as Lopez’s next opponents.
On the undercard:
Yuriorkis Gamboa TKO 4 Whyber Garcia
Odlanier Solis TKO 2 Monte Barrett
Pawel Wolak TKO 5 Carlos Nascimento
John Duddy UD 8 Jorge Muñoz
Omar Chavez UD 6 James Ventry