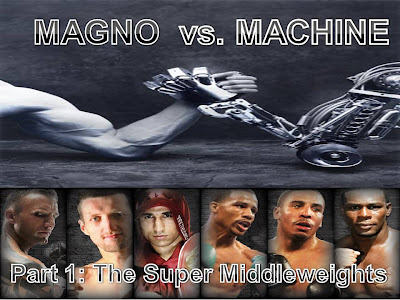 John Henry is a figure from American folklore, a symbolic representation of the modern man vs. machine debate.

According to the story, John Henry was a famously strong “steel-driver” erecting railroads with his co-workers across the mountains to the West.

When the greedy railroad boss purchased a steam-powered hammer to replace the railroad crew, John Henry issued a challenge: him vs. the machine for the jobs of his crew.

Henry ended up beating the machine, but he paid the ultimate price; His heart exploded afterwards and he collapsed on the same railroad tracks that he had just put down.

Now, Boxing Tribune editor-in-chief, Paul Magno takes up the battle as he goes toe to toe with Title Bout Championship Boxing in a 21st century boxing-related battle of man vs. machine.

In this series, both Magno and the Machine will make predictions for all the upcoming major bouts and records will be kept to see whether a modern day John Henry stands a chance against a multi-functional, mega-powered computerized opponent.

And where better to start than a double-header from the revolutionary Showtime Super 6 Boxing Classic.

Magno: Both fighters made a name for themselves eight pounds lighter in the Middleweight division and, now, both are trying to establish themselves as top dog at 168.

Despite the odds being stacked against Taylor, he still represents the best and most accomplished fighter, by far, that Abraham has ever faced.

In a lot of ways, Taylor and Abraham are similar in style and ability. Both are multi-talented boxer-punchers who are separated from 98% of the pack based solely on pure athleticism.

Taylor’s major defects have been focus and stamina, with both becoming legit liabilities as a fight progresses. Recent losses against Carl Froch and Kelly Pavlik were testaments to Taylor’s flaws as a fighter. In both fights, Taylor was solidly ahead and ended up suffering TKO losses.

But the question is whether Abraham’s defects as a fighter negate Taylor’s biggest flaws. Abraham, as talented as he is, couldn’t be described as a pressure fighter by any stretch of the imagination. He mostly fights in flurries, content to let loose for brief periods of time and steal rounds with his flashes of ability.
The questions in this fight will be whether Abraham can significantly pressure Taylor so that stamina becomes an issue later in the fight and whether Taylor’s natural ability can negate Abraham’s natural ability.

Machine: As a bigger middleweight, Arthur Abraham should hold a slight advantage over Jermain Taylor, with a perfect physical condition in a much more favourable weight.

Fighting in his adopted country Germany, Abraham will be at an immeasurable advantage as the officiating is one of the most biased on the planet. Any close fight on the scorecards, will go Abraham’s way. Tough luck. That’s why you need to do more than just win a fight in Germany.

The magnitude of his punches should be enough to trouble a post-prime Taylor, who still has the ghost of Kelly Pavlik tap-dancing in his mind under any kind of pressure.

Abraham has been described as one of the best finishers pound-4-pound in the sport today, in the same category as his super middleweight rival Carl Froch, for his outstanding punch accuracy and output when an opponent is hurt.

In front of the richest people in Berlin, Arthur Abraham will send a statement to the rest of the Super Middleweight fighters, with a quick stoppage victory over former Olympian Jermain Taylor.

Abraham hurts Taylor with a straight right in the early exchanges of the first round, and Taylor struggles to make it through the opening round on his feet. Abraham moves in for the stoppage in the second round, and punishes a negative Taylor who falls to the canvas under the heavy pressure from the Armenian. Taylor survives another minute, but it counts for nothing, as the referee judges that Taylor has received too much punishment and waves away the contest. Abraham is the winner by TKO in the second round.

Magno: This will be a fun match as two unorthodox talents with complete opposite skill sets and fighting philosophies do battle in a screamingly pro-Froch Trent FM Arena in Froch’s hometown of Nottingham, England.

Froch, the defending WBC Super Middleweight champ can be seen as a slow-footed pasty version of Tommy Hearns with arms down low and a desire to mix it up.

By far the more accomplished of the the two, Froch has already earned his place with wins over athletically gifted fighters Jean Pascal and Jermain Taylor.

Froch’s success depends on his ability to lure Dirrell into a fight and not engage in a boxing match. He was able to do that with quick-fisted fighters like Pascal and Taylor, but Dirrell could be another story.

Andre Dirrell can be seen as the junior entrant of the Super 6 Tournament. He’s perhaps the most athletically gifted of the six, but also the least experienced.
Patterned after Roy Jones Jr., Dirrell is a speedster who, only recently, has started adding some power to his game. The question will be whether he can handle the pressure of fighting a guy like Froch in a place like Nottingham.

If the flat-footed Froch can’t lure Dirrell into a battle, he will be chasing the American all day and catching enough counters to lose rounds. Dirrell’s history suggests that, when pressed, he gets on his bike so that could mean big problems for Froch.

Machine: The two unbeaten fighters should put on a show as their different styles will surely make a gripping fight at the Trent FM Arena. Could hometown scoring be a factor?

Froch will be defending his WBC super middleweight belt for the second time, against a switch-hitting speedster that has far superior footwork and a considerable hand speed advantage over the champion. The champion might be judged as flat footed, but makes up for it in the power stakes, as he will possess a serious threat to the untroubled Dirrell.

Dirrell is expected to be on his bike for most of the fight and his punch output should be greater than Froch, so if it goes to the scorecard, Dirrell will hold a major advantage.

Dirrell’s more eye-catching flurries are enough to win him the opening rounds on the judges’ scorecards, as he silences the Nottingham crowd. Froch takes the closer and gritty middle rounds to even it out on the scorecards. The champion edges ahead in a close 9th round, the best of the fight. Dirrell surprisingly thrives under the relentless pressure of Froch, and wins the final rounds to split the Showtime team… and the judges.

Both fighters think they have done enough to win it. Press row are all split with different opinions as the scorecards are announced. Dirrell wins a thrilling opening to the Showtime Super 6 Boxing Classic, with an extremely debatable split decision, 116-112, 115-114 to the American and 115-113 to Froch.