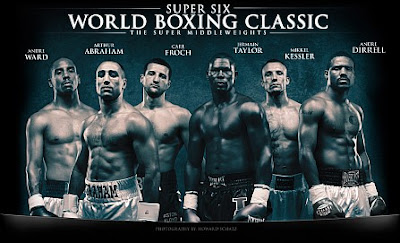 The “Super Six” tournament has brought together some of the best fighters at 168lb. But who will win? Who will be the surprise package? And will the belts change hands in each and every fight? There are many questions that need answering and will hopefully be resolved in the next 20 months or so.

Now we look to the contenders. So who’s battling it out? And what chance do they have of winning?

The joint favourite to win the “Super-Six,” the Nottingham-based fighter who claimed the WBC belt last December in a war with Jean Pascal

Pros: “The Cobra” as he’s known to his fans, is the tallest are arguably the biggest puncher of the six combatants. He has recent wins over Pascal and Taylor which is superior to the other participants. He is the only one of the six to have a win over another one of the group. He comes on strong later in fights, epitomised by his KO of Taylor. His heart and mental strength are just as good as anyone in the tournament, if not just that little bit better. Arguably in his prime at 32.

Cons: In his fight with Taylor, he was out-boxed for large parts of it and his fight with Pascal was very close. His low guard can often make him vulnerable to attacks which could be a reason to bet against him in a tournament that includes more boxers than sluggers.

Opinion: Froch has the ability to go far in this tournament and is one of the most proven fighters here. However, if the other guys can out-box him and stay with him in the later rounds, he could be in trouble.

The most established man at 168lb is the “Viking Warrior.” He’s also previously held the WBC belt, which he lost to Joe Calzaghe in 2007.

Pros: He’s been in the 168lb division far longer than the other fighters and has more experience. Showed a lot of fight and heart in defeat in his unification bout with Calzaghe. Has a strong job and punches in bunches. Probably the most physically gifted of the group and in his prime at 30.

Cons: Hasn’t been in the ring since October 2008 due to contractual problems and hasn’t fought a name fighter since Calzaghe and Andrade in 2007. Despite his fight with Calzaghe, he has few names on his resume and has never fought outside of Europe. In order to win this tournament, he will have to travel well.

Opinion: This will be a big step up in opposition for Kessler and it will be interesting to see how he copes. Most people are calling him the No. 1 seed but we’ll see how he fares come November.

The former IBF Middleweight king is stepping up and will face his first real tests at 168lb during the super-six tournament.

Pros: Successfully defended his IBF Middleweight title on ten occasions, something no other competitor in the tournament can claim. He’s unbeaten and at 30 is still in his prime. Clearly a tough fighter, he battled with a broken jaw for the majority of his first fight with Miranda. Just moved up from middleweight so won’t struggle to make the 168lb limit. Raul Marquez claims Abraham’s speed bothered him more than Shane Mosley’s, a bold claim.

Cons: He’s by far the smallest guy in the tournament and will be giving up a height and reach advantage to his fellow competitors. Hasn’t fought many guys who are larger than him and is largely untested at the weight. Furthermore, he’s only fought outside of Europe once and most of his fights in the super-six will likely take place in the USA. His middleweight defences were not against the highest opposition and therefore, flatter and deceive.

Opinion: Abraham is an unknown quantity, he’s opposition hasn’t pushed him and he’s barely fought at 168lb. I expect him to challenge but probably won’t take home the overall crown to the disappointment of his subjects.

In Part 3, I will complete a review of the remaining three fighters and conclude who I think will win the super-six tournament.