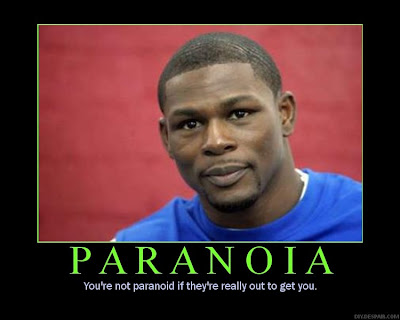 “Taylor’s people sent an advance man to Germany to look for bugs and cameras in the gym where Taylor will prepare for his Oct. 17 super middleweight fight with unbeaten Arthur Abraham. Taylor, the former middleweight champion from Arkansas, will not eat in the restaurant at his hotel; he’ll dine out, unannounced, or his chef will fix something.”

This is a blurb from an otherwise forgettable fluff piece in an Arkansas newspaper by writer Harry King, but this does touch on an on-going theme in German fight history.

There is a long line of gossip and innuendo regarding some pretty shady goings-on when it comes to American boxers fighting in Germany.

Strange things often seem to happen to foreign fighters there. The stories usually involve sharp, aggressive challengers arriving in the country, looking like killers in the pre-fight publicity and then showing up to the fight with glassy eyes and a lethargic workrate. After the inevitable loss, they wander the ring like zombies with absolutely no idea why they simply could not throw punches.

The stories of German foul play go back to the first Joe Louis-Max Schmelling fight at Yankee Stadium in 1936 (Schmelling’s people were accused of drugging Louis’ water before the fight) up to current walking dead performances by Sam Peter vs. Vitali Klitschko and Eddie Chambers vs. Alexander Povetkin.

The theories run the gamut from laced food and water to tainted air supply from hotel air conditioning vents. Of course, none of the theories or cases are provable, but that never stopped trainers and managers, conspiracy theorists by nature, from acting on the stories.

A famous case is when Sam Simon, The Simpson’s producer and former manager of Lamon Brewster, kept the reigning WBO Heavyweight Champion out of Germany for as long as possible before his defense in Hamburg with German contender Luan Krasniqi. Simon would go on to sequester his fighter under tight security for whatever time spent in his opponent’s home country. No food or water was accepted, no casual walks in the park permitted, no air conditioning was turned on; Everything necessary was brought in by Team Brewster from the UK.

Brewster would go on to flatten Krasniqi via ninth round TKO in a bout littered with injustices ranging from questionable scoring to a 17-second count that allowed Krasniqi to get up following a knockdown in the eighth round. Eventually, it was Krasniqi himself who called an end to the bout after he was knocked down again in the ninth…Krasniqi was ahead on all three judges’ scorecards at the time of the stoppage.

Who knows if the tight pre-fight guard on Brewster stopped any potential sabotage from the German promoters or if just the idea of being protected made Brewster feel more confident. The fact is that Brewster and, four years later, Eddie Chambers (who was also allegedly shielded under tight security by his team) in his bout with Alexander Dimitrenko were the last two American fighters in recent memory to actually look good fighting in Germany.

Now, it appears that Team Taylor has stepped up their game in trying to shield Jermain from any questionable tactics. But who will shield Taylor from the questionable practices that often take place within a German boxing ring?

And, then, of course, he also has to deal with Arthur Abraham, one of the top fighters in the world today.

In other words, while Team Taylor is in Germany on their hands and knees, inspecting gyms and hotel rooms, they should also be using that time to pray for a miracle…Taylor’s going to need one.