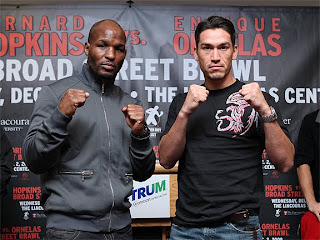 As previously announced, Bernard Hopkins will fight his December 2nd tune-up bout against Mexican Middleweight, Enrique Ornelas, at the Liacouras Center in Philadelphia.

What we didn’t know was that the bout will be aired live on Versus and that at least some of the proceeds from the card will be going to charity.
This is a “keep busy” fight for Hopkins in anticipation of his scheduled 2010 rematch with Roy Jones (who will be fighting Danny Green in Australia on that same day).
On the undercard of Hopkins-Ornelas will be three well-regarded Philly fighters: Welterweights Rock Allen and Danny Garcia as well as Jr. Welterweight, Karl Dargan.