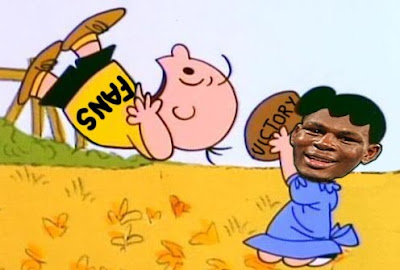 Alright Jermain, you got me. Good one. Fool me once, shame on you; fool me three times, shame on me twice. I have to admit when I’ve been had, and I have to appreciate such an elaborate joke. I mean, to get Bernard Hopkins and even Winky Wright to play along, man, that was good thinking.

For the past 5 years I thought that you were something really special. You came out of nowhere with a sweet record. You were like twenty-three and oh, with something like seventeen knockouts. That’s pretty good. Then there was that jab; Fools were getting dropped by it, boy it was sweet. Then you came right on in and beat unbeatable Bernard Hopkins, twice. I know it was close, but you didn’t want it to look easy, you just wanted to give us a taste.

Now look at us, four years later and I just can’t get my head around it. That Pavlik fight was kind of a fluke, right? That’s what you wanted us to think. He caught you and that was it. The second fight and it was one of those things, like Pavlik just had your number. It happens to the best, Winky had Mosley’s number, you had B-Hop’s, it can happen to anybody. Anyway, you went right in and rocked Lacy, and then you were going to take that title from that 168 lb Vic Darchinyan named Carl Froch.

That jab was right there all night long. Froch tried, but he couldn’t get in there. You kept snapping his head back with those smart, straight shots, and then you dropped the hook on him… Damn, it was nice. Now we know you get tired going into those later rounds, but it would be okay, just coast for a few minutes since you already took the damn fight. I was already leaning back in my chair, ready to celebrate, a smile on my face, counting down the last round.

You got me though. Spit take, double take, yell at the television. It was a doozy. Bravo my friend. You let Froch storm right across the ring and shellac you. You got knocked down, remember that? You pretend like you can’t hold on so that we start yelling in our living rooms and the bars. You got up, and you still had a chance, man just ten more seconds. We’re at home jumping up and down, making fools out of ourselves and you get knocked out.

Come on, man. What the hell was that all about? You beat B-Hop, homie. What are you doing to me?

Anyway, you still got that solid base of knowledge and experience. You get gassed at the end, but now you know that. If you didn’t know it after Pavlik, you sure as hell knew it now, and you’d fix it.

I said on the message boards that I was still angry at you for throwing it away against Froch, so I predicted against you, but there I was, talking to Paul Magno and I admitted to secretly rooting for you. I’m sorry, I’m sentimental. Besides, you’re the best guy Abraham’s faced. The guy just covers up and then steals rounds. That’s no way to fight.

And you, you beat B-Hop. Abraham was coming up in weight, you’ve already done fought at Super Middle. It would be a little tough, but you know your limits, you wouldn’t get caught this time. Right?