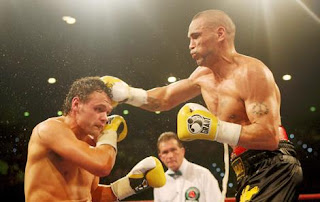 After the weigh-in, the press conference got heated. Mundine tried to wind up his rival Geale, by declaring he wanted the fight at a different weight. After Geale laughed in his face and complained, Mundine reacted by ripping his shirt off and flaunting his lack of preparation. “I haven’t been training hard and been eating too much chocolates and cakes so I said to my management team that I wanted the fight at 76 kg. This is my show and if he wants to get paid he’s got to agree.”

In his fight, IBO middleweight champion, Mundine, 167.5, chased Fallinga around the ring for 10 rounds, who was trying to survive more than fight while local favourite Geale, 159.75, started tentatively before picking up the pace in the middle rounds. Barbosa went toe to toe with Geale in the 11th and 12th to give the fans some competitive action before the final bell. All three judges scored the bout 120-108 to Geale. He picked up the worthless IBF Pan Pacific Middleweight Title.

Throughout his fight, Mundine was booed by the pro-Geale supporters for the lack of action. Mundine was quick to remind the supporters of his victory over Geale earlier in the year “To all the haters in the building, it’s OK, I am The Man. I definitely won last time, but next time, I will win defiantly.” The judges scored the fight 100-90, 100-90 and 99-91.

In the post-fight press conference, Mundine expressed a very similar opinion to WBC super middleweight champion Carl Froch, after his split decision victory against Andre Dirrell at the weekend. “He came in to survive not to fight and it didn’t make it entertaining for the fans. I just had to deal with what was in front of me. I caught him and he was on his bike and I couldn’t pin him. I caught him again and he reversed behind the referee. Pure negativity.”

Mundine went on about how Paul Williams and Kelly Pavlik opted out against him “I’ll take the winner, I want the best but the best don’t want me.” Geale also revealed his plan on the world stage “Mundine is going to be next, but hopefully I’ll challenge for the IBF middleweight title in 2010.”