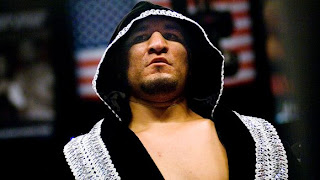 Following Kelly Pavlik’s withdrawal, Paul Williams has decided to go alone and fight on December 5 closer to home. An opponent for Williams is yet to be named but names are being branded about.

The card also included an intriguing 149 pound catchweight fight between two former welterweight champions, Carlos Quintana and Joshua Clottey. That fight has currently been cancelled but both camps are hoping it could be re-sheduled, and possibly placed on the same card as Williams.

On the up side, Chris Arreola who’s also promoted by Dan Goossen, is rumoured to be making his comeback following a devastating 10th round stoppage defeat to WBC Heavyweight Champion Vitali Klitschko in September. His opponent is not yet named.

It will be interesting to see what physical condition Arreola will enter the ring on December 5. If he stays true to his word, which many boxers don’t, he will enter the ring a slimmer, hungrier, technically better fighter in much better condition. Or he’ll get bigger, even heavier, like many heavyweight have in the past following a heavy defeat. His physical condition will depend on his mental condition and how much he wants that respect from his critics.