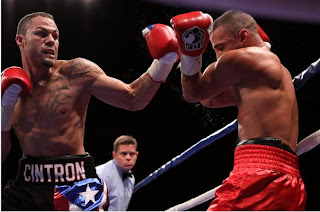 Former welterweight champion Kermit Cintron (32-2-1, 28 KOs) made his debut in Puerto Rico a spectacular one by stopping Juliano Ramos (15-3, 12 KOs) of Brazil by fifth round TKO on Saturday night at the Roberto Clemente Coliseum in San Juan, Puerto Rico. The bout was the main event of a special edition by DiBella Entertainment’s “Broadway Boxing” series which was promoted by PR Best Boxing Promotions (Ivan & Peter Rivera) and DiBella Entertainment.

Cintron studied his Brazilian opponent Ramos for rounds one and two, cagily pawing and jabbing. He quickly opened up in rounds three and four throwing combinations and wide hooks that staggered his opponent. Ramos went down at the end of the fourth following a straight right from the Puerto Rican. Cintron had Ramos again reeling from his power right hook that had him in bad shape before his corner didn’t allow him to come out for round five.