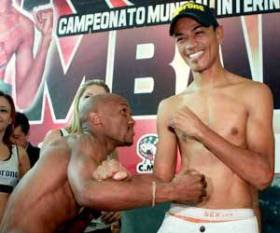 Mbamba lit up pre-fight press conferences by deriding Rojas and insisting that the interim champ was “nothing.” However, from the opening bell, Mbamba had difficulty closing the gap against the much taller, fellow southpaw, Rojas, and only managed to land a few meaningful punches through 12. He also suffered two knockdowns.
The judges scores unanimous: 117-109, 117-109, 119-108. The BTBC had it scored 116-110, also for Rojas.
The win sets up a December 12th date to fight Vic Darchinyan for the full 115 lb. title on the Timothy Bradley/Lamont Peterson Showtime card.