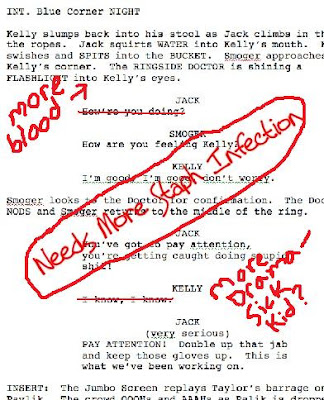 I come from a film background and am always bouncing ideas around in my head. Sometimes as an exercise, I think in screenwriting structure. I see stories and I break them down into acts, climaxes, points of no return and all of that good stuff. Kelly Pavlik’s story has been playing out every week in the Boxing Tribune’s message boards, and I end up breaking it down into Acts. But it’s hard to take a story like Pavlik’s and make it into a screenplay because we don’t know where he is in his career.

At the time of the Taylor fight, we would have made our movie a motivating boxing flick about a couple of regular guys who, through hard work and knuckle grease, rose to the top of the world.

But the story goes on, and we as viewers don’t want things to be too easy. Sure we could interject some drama into Pavlik’s personal life in order to make things interesting, but instead his career played out and provided the drama and the movie becomes more interesting.

In the Act 1 of the screenplay, we would have Pavlik as a young kid meeting Jack Loew and kicking off Pavlik’s amateur career. We could show Loew paving driveways and Pavlik working minimum wage jobs; at night they would get together and train. Loew would learn from watching fights and reading books on the subject, Pavlik would listen and take the hits in the ring. Act 1 could end when Pavlik goes pro. This is usually the point of no return in the script, the point where our heroes can’t go back to their regular lives.

So far so good, right? Act 2 kicks off with Pavlik working his way up the ranks. He fights here, he fights there, he’s a skinny, tall, white kid from Ohio and he gets slagged off in some bizarre reverse racism, but keeps on trucking right on through the opponents. People start to take notice and he gains momentum. All the while, he flips tires and bangs them with sledgehammers under the watchful eye of Loew.

Of course there’d be some drama with his personal life. He has a kid, and he’s not with her mother. That could come into play, no problem. His child can add that much more humanity to him as a character and our audience will love it.

Now things get complicated. If we erased the last year from the history books, we could have the movie culminate in the Taylor fight. Pavlik would climb off of the canvas and in an exciting climax, batter Taylor into the corner and make audiences happy. Act 3 would be him going back to his family, or hugging his kid and Loew and he’s lifted into the air and the frame freezes and we’re treated to some text about Pavlik.

That wouldn’t be very interesting, now would it? Instead, as the arc rises, Taylor would be moved to the middle of the second act. It would still be exciting but now it’s not the point of the movie. Pavlik beats Taylor, twice. That’s our apparent victory. This is where our hero thinks he’s got things figured out and that they can make it. We need these highs in order to contrast to the lows. We need to be taken on the rollercoaster ride.

Pavlik wins against Taylor, twice. Everything is great. He’s the champ. Everybody is buzzing. We need someone to root against, we need to surprise the audience. Hopkins comes off of a bad performance against Joe Calzaghe. Pavlik steps up two weight classes to fight Hopkins. We let the audience think that Hopkins is done. He was gassed at the end of the Calzaghe fight. Pavlik has so much momentum and has so much support that he can’t possibly lose. A few days before the fight, he gets a cold. He shrugs it out because he can’t possibly lose. This isn’t an excuse for losing, but a little hint to the audience that things might not be all hunky dory.

In an agonizing sequence, Pavlik loses, big time. The audience has a hard time. Now they suffer along with Pavlik. Those of us who watch movies a lot think that this is the lowest point of the story. Maybe Pavlik hits the booze a lot. He’s in a funk and takes it out in his attitude toward his trainer and family. He’s not abusive, but he’s taking the loss pretty hard. Eventually he works out of it and Pavlik goes on to beat Rubio in the rematch. The audience thinks that now the story will pick up again and Pavlik will prove to be a great champion. Pavlik schedules a fight…

Then Pavlik gets a staph infection. The fight is cancelled. He starts getting depressed. He can’t quite shake the beating he got from Hopkins. His technique was too one-dimensional and maybe needs someone besides Loew. His management team and the press are calling for a new trainer but Pavlik is loyal and he sticks with Loew.

A fight against Paul Williams is scheduled, and fans get excited, but Pavlik can’t shake the infection. There’s a threat that his hand will get cut off. The fight is on, the fight is off, the fight is on again. It’s stressful, it’s hard to stay focused. Pavlik’s team tries to stay positive. Things are looking good, they’re going into the fight against a respected fighter; we’re reaching the climax, perhaps… until Pavlik is hospitalized from an allergic reaction. Pavlik’s greatest enemy is not a fighter, but disease he can’t shake. He’s mind is willing but the body is weak.

I don’t know how it will end, though. Does he ever fight again? Does he lose respect from his fans because he’s unable to fight? Skeptical boxing fans never believe stories about disease, maybe Pavlik comes back and fights Williams. Maybe in the end it’s a triumph. Then again, maybe this movie is a tragedy. In the theater audience we’re wondering, “what else can go wrong?” What we thought was a low against Hopkins is dragged even lower, and we’re worried it’ll keep sinking and we start getting angry at our friends for dragging us to this movie to begin with.

Does it end well?

I don’t know, the story is not yet finished.