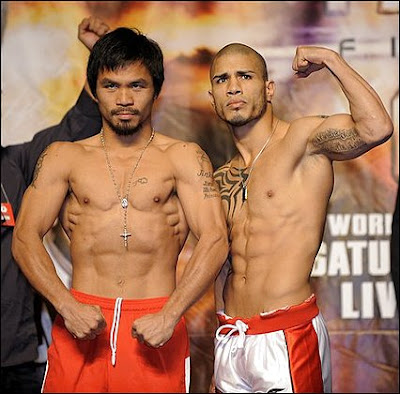 WBO welterweight champ Miguel Cotto and people’s champ Manny Pacquiao both weighed in under their contracted weight of 145 pounds, in front of a massive crowd at the famed MGM Grand in Las Vegas, Nevada. Pacquiao (49-3-2, 37 KOs), tipped the scales at 144 pounds.

Miguel Cotto (34-1, 27 KOs), weighed in bang on the contacted catchweight of 145 pounds, ahead of his seconds defence of his WBO belt. Freddie Roach and Joe Santiago had a minor kerfuffle, but nothing severe, enough to catch the eye of many fans and adding more spice to the November 14’s fight.

The 12-round bout is the main event of the “Firepower” pay-per-view event, and will be broadcasted live on HBO PPV.