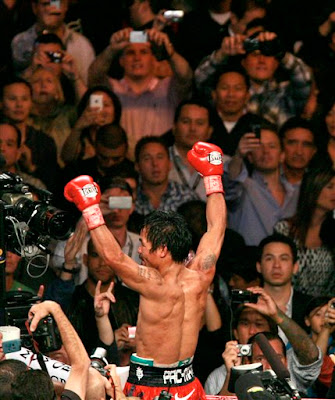 He puts on the kind of exciting performances that make people take note and he certainly has the public support and positive publicity to become an even bigger star, but as Manny Pacquiao achieves yet another milestone with his blow-out against Miguel Cotto this past Saturday, the call to place him among boxing’s all-time greats is louder than ever.

Now that the standing ovation has settled down, we can take a closer look at where Manny stands in history by looking at how his career holds up among his peers.

As a frame of reference, we’ll take a look at Pacquiao’s career compared to the previous Big Man on Campus, Oscar De la Hoya’s. We’ll look at Manny as compared to Oscar in the area of major championship bouts and title reigns, with a breakdown of titles, defenses and attempts at unification:

*It should be noted that, although not recognized as official world title bouts, Pacquiao beat lineal champs Barrera and Hatton at Featherweight and Jr. Welterweight respectively for the Ring Magazine title.

So, is Pacquiao ready to be tossed into the mix with names like Sugar Ray, Armstrong and Ali? The sober truth for the Pacquiao true-believers is “no.”

But he definitely stacks up with De la Hoya and that puts him at, or near, the top of modern day greats…and Manny still has a few fights left in him…Not bad for a skinny kid from the slums of General Santos City.