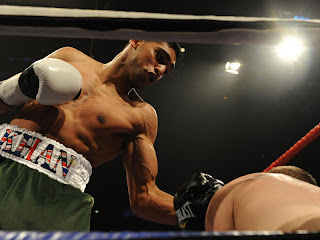 Khan came out relaxed and the first clean right hand had Salita on the canvas after 10 seconds. Salita struggled to get to his feet, but was over-whelmed by more lightning fast punches from Khan as Salita was down again.

Salita was wobbly and had lost his senses as Khan rushed forwards looking to finish the fight early. A one-two combination saw Salita fall into the ropes, with the referee waving away the contest after only 01:16 in the first round.

Khan and Roach hinted at fighting in America in 2010, maybe even on the Mayweather-Pacquiao undercard on March 13. Could Khan conquer the States? On the basis of that performance, yes he Khan!