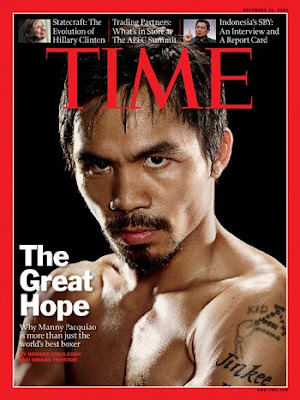 Ok, at the risk of irritating all those who would blindly believe that Manny Pacquiao sits on a throne of benevolent love and spends his free time curing cancer kids while Floyd Mayweather cowers under a rock, looking to steal peanut butter cookies from girl scouts…here I go.

Manny’s to blame for this mess and he should rightfully carry the stigma for the collapse of The Fight of the Millennium.

I do hope you know that…

Regardless of whether you love Manny and hate Floyd, the reality of the matter is that this fight would be already signed and sealed if not for Manny Pacquiao and his inability to give in to one contractual stipulation.

You would think that Manny could be a bit more flexible about bending slightly, just this one time, considering the fact that he’s had an easy go of it, pretty much forcing his opponents to give in to his every contractual whim since the second Morales fight in 2006.

After all, this was a contractual demand that would benefit neither man. Both would be subject to random blood tests by the USADA …so… Even playing field, right? It’s not like Mayweather was asking Manny to put himself at a major physical disadvantage, ala Pacquiao vs. (fill in the blank).

Well, fear not, Manny…The USADA is used to dealing with the finest athletes in the world in the world’s biggest sporting events…I promise they will not cut you with a rusty razor and suck out 2 pints as you make your ring walk. You have my word on that.

As a matter of fact, the USADA would only extract, literally, drops at a time, about a teaspoon of blood…that’s all that’s required for the testing. Hell, if this fight gets signed, I’ll even send over some Sunny Delight and a box of cookies to help you “recover.”

Sadly, this may be a moot point now. Bob Arum has already issued the “Mayweather is chicken” press release, signaling the end of the discussion and the worker bees in the so-called boxing media have already started posting the press release as a news story…Isn’t it funny how Arum punctuates every hissy fit against Mayweather with a “Floyd is afraid” press release? Like clockwork.

But, be fair and keep in mind what has happened during these negotiations. The noise hasn’t been coming from Mayweather and crew this time…No, the belligerent one has been Pacquiao as the veneer of humble super hero slipped off to reveal a man just as stubborn and ego-driven as Mayweather.

While Floyd Mayweather has remained quiet during the negotiation process, we’ve heard excuses, deflections and lawsuits from the Pacquiao camp. Phobias of needles, fear of giving blood, 10 million dollar weight penalties, superstitions, false claims about the accuracy of blood testing, slams against the USADA, pointless schedules for blood tests, etc…

Earlier today, I contacted an expert on the blood testing issue with over 30 years of practical experience. I asked him about Team Pacquiao’s assertions that there were no accurate tests available for HGH and about their desire to have scheduled blood tests 30 days before the fight and immediately after, rather than random testing. Here’s what he had to say:

“Yes there are many immunoassays on multiple platforms that can assay growth hormones. Fred (Roach) was wrong. Yes, blood/serum/plasma would be the media of choice that would provide the most precise assay. Yes, 30 days before and after is useless because the body will metabolize the drugs during that time period. (As for the amount of blood to be drawn) A teaspoon ~ 5 ml would be sufficient.”