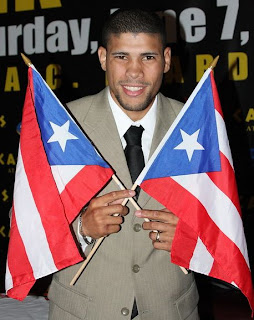 There is a long line of stoic, no-nonsense boricua heroes, from Jose Torres and Carlos Ortiz to Wilftredo Gomez and Wilfredo Benitez, right up to Felix Trinidad and Miguel Cotto. The Puerto Rican hero has been characterized by an old school blend of technical proficiency and pure, island-forged bravery.

Reigning WBO Super Bantamweight champ, Lopez, seems to be cut from a different cloth than the typical Puerto Rican boxing star. More at home in front of the cameras and always willing to flash his trademark toothy grin, Lopez is, personality-wise, more Hector Camacho than Wilfredo Gomez.

Of course, being a friendly, marketable character isn’t a bad thing…But the question is whether the ever-smiling Juanma’s ring work is slipping as his fame is on the rise.

The danger with handling any young fighter with phenomenal abilities and charisma is somehow finding a way to stop the kid from reading and believing his own press clippings. When the hangers-on and users get their hands on a young talent, gym work becomes secondary and, usually, the fighter stops advancing. Weight starts to become a factor and his mental preparation is almost nil because, after all, he’s really been made to believe that he’s the absolute best and completely untouchable.

Partying and out of gym distractions have been rumored in the Lopez camp for awhile now and the young star almost paid the price with a near loss to unheralded Rogers Mtagwa back in October of last year.

After being dominated through the first half of the fight, Mtagwa dominated the second half and nearly knocked Lopez out in the 12th.Truthfully, most fights would’ve been stopped in that last round as Lopez was taking a true pummeling.

During a post-fight interview, Lopez may have let us see the state of his ever-inflating ego when he said, “The 12th round was all heart. A lot of people think I am Superman. I’m not. I get hit like everyone else. But I’m resilient.”

“A lot of people think I am Superman…”

Does a young fighter, with the proper mindset, think in such terms when he’s barely scratched the surface on the world stage and has yet to really fight that one defining bout of his career?

Top Rank and Team Lopez have answered that question by forcing Juanma to step up in the hope that a higher level of opposition will inspire a higher level of seriousness and preparation from their talented fighter.

It’s a tricky gamble that will result in either the realization of Lopez’s true potential or the complete implosion of a would-be star.

Aside from being one weight class higher than Lopez, Luevano will give him looks and angles that the young boricua banger has never seen before and will likely be made braver by the beating Lopez took against Mtagwa.

Should Lopez get by Luevano, there are any number of tough, career-defining fights for Lopez ranging from the consensus #1 featherweight, Chris John to fellow young stud, Yuriorkis Gamboa, to old war horses, Israel Vazquez and Rafael Marquez (who will fight for the fourth time on May 22nd).

The opportunities are endless for Lopez and true legend status is attainable, but the question remains whether his ego as already surpassed his ability.

We’ll get a good idea of where Juanma’s head is at this Saturday.