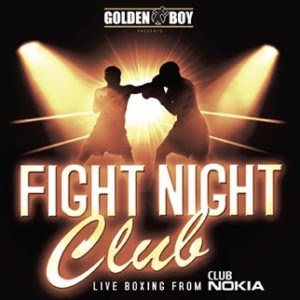 The bantamweight contender looked confident in his public sparring session, showing no ring rust for a guy who hadn’t fought since August. Almanza was no match for Mares in any area, which probably was Golden Boy’s plan as he has a much bigger fight on the horizon.

That’s against IBF bantamweight titlist, Yonnhy Perez, who entertained us all in a thrilling fight with the popular Joseph Agbeko. He’ll have a big stage to perform on, as they fight in the co-feature for Marquez-Vasquez IV.

Watching last night’s fight will hardly swing your opinion one way or the other for Perez-Mares. At the moment, I’d go with the more experienced Perez to outpoint the more talented Mares, but my opinion may change closer to May 22.

On the undercard, Ronny Rios (10-0, 5 KO) stopped Andreas Ledesma in five, while Derrick Wilson (5-1-2, 2 KO) took another hit to his record with a points draw against Adam Ochoa (2-1-1, 1 KO). He landed scoring shots often, but maybe not often enough as he was too timid at times.

Commerce, California – Demetrius Hopkins (29-1-1, 11 KO) made a successful comeback from a 15-month layoff with a shutout ten-round unanimous decision victory over journeyman Jesse Feliciano (15-9-3, 9 KO) at the Commerce Casino, California.

From the opening bell, it was clear that Hopkins was a skill level above as he shook off any apparent ring rust to dominate every round against the tough Feliciano. Hopkins looked very sharp, landing scoring shots at will at times against his late replacement, Feliciano, who stepped into Freddie Norwood’s role for the night. The judges’ scores were 100-91, 100-90, 100-90.

Hopkins was impressive, especially when you consider he was fighting a junior middleweight, as Feliciano tipped the scales at 149 lbs. Felicinao’s record is also deceiving, with most defeats against well-known fighters and a surprise TKO-7 win over Delvin Rodriguez.

This win shows that Hopkins is not here to mess around, and probably gives him a ranking by one of the organization bodies. Considering he was competitive against a top-5 Kendall Holt in 2008, I would not be surprised to see him in an elimination process soon, and knocking on the door of the top 10. He needs to stay active if he wants to be taken seriously.