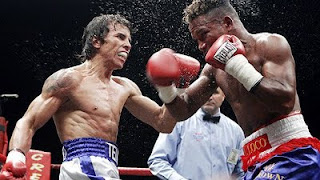 In a sickening story, Edwin Valero has been arrested on suspicion of murder of his wife, Jennifer Carolina Viera de Valero, only 24 years of age.

She was found dead in a hotel room in Valencia, stabbed three times. They had a stormy relationship, with many domestic violence charges launched against Edwin, with one only last month where she later claimed that she fell down the stairs.

Valero was forced to admit that he had a problem, and intended to cure his alcohol and drug addiction. But only days later, just as he prepared to fly out to Cuba for his training camp, he crashed his car drunk.

I wrote an article about Valero and his problems, but things look like they’ve taken a gruesome turn for the worse. Little information has been released, and we’ll do our best to keep you updated.

The BTBC wishes to extend our greatest sympathy to the friends and family of Jennifer Carolina Viera de Valero.