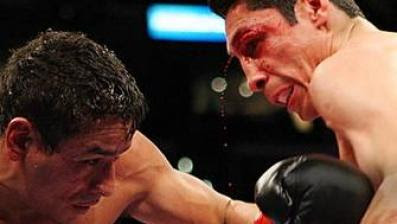 The bout was hardly dull, but it was a bit of a let-down as Vazquez seemed to be a step behind Marquez and appeared to be sporting fresh, barely-healed scar tissue above his left eye (which would be brutally ripped open in the first round).

After two relatively even rounds, Marquez put the pressure on in the third and dropped Vazquez, who was bleeding heavily from two cuts, one over each eye. Marquez put on the pressure and left the ref no option but to stop the fight halfway through the third.

After the bout, both fighters were eager to sign on for a fifth bout in their series, but Vazquez’s manager, Frank Espinoza Jr., commented that this would be the last fight of his client’s career.

In the televised opener, IBF Bantamweight champ, Yonnhy Perez (20-0-1, 14 KOs), fought to a majority draw with Abner Mares (20-0-1, 13 KOs) in a thrilling display of boxing professionalism.

Mares used his legs for the majority of the bout, opting to stick and move while Perez stalked him and tried to coax his younger rival into a back and forth ground war.