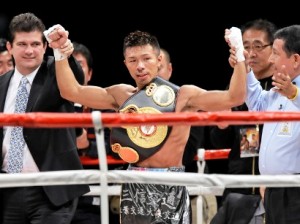 Uchiyama won his title by beating Juan Carlos Salgado in January of this year and has since made three successful title defenses. Solis became interim champ in February and has made two successful defenses of that lesser crown.

Also on the card, WBA jr. featherweight titlist, Ryol Li Lee (17-1-1, 8 KOs) will make his first defense of the title he won from Poonsawat Kratingdaenggym by taking on Akifumi Shimoda (22-2-1, 10 KOs).

Both contests should be highly competitive bouts between fighters at, or near, the top of their divisions.

Also on the Japanese scene:

Kameda’s brothers, Koki and Tomoki will also be on the card.