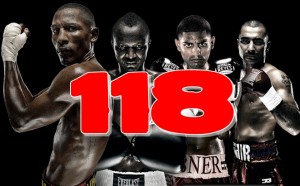 While the heavyweight and welterweight divisions stagnate under the rule of Kings Klitschko and Pacquiao, respectively, there are several other stacked divisions with plenty to get excited about. One of the most intriguing, boasting a Top 10 as deep and as talented as just about any other division in the sport, is the 118 lb. bantamweight class.

With much of the top talent on display in the final month of 2010, here’s an in-depth look at the division and the key players:

Fernando Montiel (43-2-2, 33 KOs) (WBC, WBO Champ)– A battle-hardened Mexican pugilist with extensive world class experience. A former flyweight and super flyweight champ, Montiel has been campaigning at 118 since November, 2008 and has notched a victory over Hozumi Hasegawa while going 5-0-1 (4 KOs) in this bantamweight campaign. Until proven otherwise, Montiel is the man to beat at 118.

Nonito Donaire (25-1, 17 KOs)– While Montiel is the man to beat, Donaire is the most gifted fighter in the division. Donaire’s only fight at 118 so far was a four-round slaughter of former bantam champ, Wladimir Sidorenko. Donaire-Montiel is scheduled for February, 2011, so Donaire will definitely get his chance at stardom soon enough.

Yonnhy Perez (20-0-1, 14 KO) (IBF Champ)– One of the sport’s most underrated stars, Perez can box, brawl and pretty much do a little of everything. He emerged on the scene with a TKO 12 stoppage of Silence Mabuza and then went on to beat Joseph Agbeko for the IBF title in a Fight of the Year candidate. Perez would then battle well-regarded prospect, Abner Mares, to a draw earlier in 2010. The Colombian native is set to face Joseph Agbeko in a re-match Saturday, the 11th, as part of Showtime’s bantamweight tournament.

Abner Mares (20-0-1, 13 KOs)– Considered talented with an elite-level skill set, some questioned Mares’ grit and resolve against the top level fighters in the division. That question was answered with his grueling battle against Perez. This Saturday, he faces Vic Darchinyan as part of Showtime’s bantamweight tournament.

Joseph Agbeko (27-2, 22 KOs)– Ghana’s Agbeko has established himself as one of the division’s hardcore, hard-working warriors. With punches in bunches and some crafty veteran moves (some borderline illegal), he already holds an impressive win over Darchinyan. This Saturday, as part of the Showtime tourney, he faces Yonnhy Perez in a rematch of their 2009 FOY candidate.

Vic Darchinyan (35-2-1, 27 KOs)– Some say that the Armenian Crab King slugger has lost some of his pop since moving up to bantamweight, but it’s hard to say that after only two official bouts at 118. The former 112 and 115lb. champ is an angry brawler by nature and will always come to fight. With one close loss to Agbeko on his 118 lb. resume, he enters the bantamweight tournament fresh and wanting to redeem himself. He faces Abner Mares this weekend.

Alexander Sasha Bahktin (25-0, 11 KOs)– Russian-born amateur stand-out has been learning on the job in the competitive Japanese Circuit.

Eric Morel (42-2, 21 KOs)– The slick Puerto Rican was to have faced Fernando Montiel earlier in the year, but pulled out due to injury. His class and skills are not to be denied; His desire and character are different stories.

Malcom Tunacao (27-2-3, 16 KOs)– Filipino, Tunacao, has been a fixture on the Asian scene and has scored solid wins over big names on that circuit.

Michael Domingo (40-15-2, 18 KOs)– Veteran fighter with only one loss in the last 3 years, but always comes up short against the top guys.

Tshifhiwa Munyai (20-2-1, 10 KOs)– relatively unproven bantam without any major wins on his resume so far, but some solid 2nd-tier wins.

Silence Mabuza (23-3, 19 KOs)– Veteran former title challenger has faced some of the best at 118, from Rafael Marquez to Cruz Carvajal to Yonnhy Perez. Always a tough fighter.

Chris Avalos (17-1, 14 KOs)– Aggressive and strong, the loss to Martin may serve to improve the finer points of his game.

Tomoki Kameda (16-0, 11 KOs)– From the famed Kameda family in Japan, Tomoki is being groomed to follow in Koki’s and Daiki’s) footsteps.

For the full Boxing Tribune bantamweight rankings, based on activity and level of opposition within the division, click HERE.