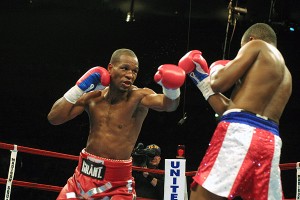 Once upon a time, boxers fought within the framework of the sport. Even with the corrupt sanctioning bodies getting involved and mucking up the narrative, the real professionals found a way to still do things the correct way.

They fought their mandatories, took their money fights, and still had time to fight the meaningful bouts that satisfied hardcore fans. They played off against the sanctioning bodies’ contenders, often using them as the tune-ups between tougher, more lucrative contests.

That era of peaceful, symbiotic co-existence between the needs of the public and the hungers of the sanctioning bodies died in July of 2005  when Jermain Taylor dethroned long-time middleweight champ, Bernard Hopkins.

The last real champion fell that night and, with him, the last vestige of boxing as an actual, workable sport.

Anybody who calls themselves a boxing fan is familiar with Bernard Hopkins and his twenty-two years (and counting) in the sport.

After a failed attempt to win the IBF middleweight crown against Roy Jones Jr. and a controversy-ridden draw with Segundo Mercado for that same belt nineteen months later in Ecuador, Hopkins would finally capture the world title in April of 1995 in a rematch with Mercado. Ten years and twenty title defenses later, Hopkins would finally succumb to a younger, fresher face in Taylor.

During his reign, he would add the WBA, WBC , WBO, and Ring Magazine titles while holding on to his original IBF belt. He was the first (and only) fighter to ever simultaneously defend all four recognized world titles and Ring Magazine’s title in the same bout.

Along the way, he took on all comers in a fairly solid middleweight class, answering all challenges and surpassing all obstacles. You’ll never hear a disgruntled challenger from the “B-Hop” era complain about being ducked or avoided…Hopkins simply beat every top challenger who was even remotely qualified for a shot.

He would keep the sanctioning bodies in check and still manage to take the legacy fights that now define his legend. There was no talk of paper champions or need for interim title holders– Hopkins was the man and had proven it to such a degree that not even the money-hungry alphabet soup boys could find the nerve to challenge his domain.

Ask the fans on the street who the middleweight champ was in 2005 and 100% of all respondents would say, Bernard Hopkins. There was no need for in-depth explanations about the difference between champions and belt holders, super champions and silver champions…Hopkins was it…and the division, as it should with every champion, revolved around him. Even the designation, “lineal champ,” was irrelevant in the era of “The Executioner.”

He would go on to capture the lineal light heavyweight title from Antonio Tarver in 2006, after his 40th birthday, and have a reasonably solid run in the 175 lb. division. But Hopkins’ greatness was established at 160 and the lessons learned about professionalism in the business of boxing were written in that very same middleweight division.

Boxing, as a “real,” legitimate sport needs the structure provided by some sort of governing body. And, in the absence of a fair sanctioning organization, even the scum-sucking sleaze of the WBC/WBA/WBO/IBF served that purpose, even if in name alone.

But, as said previously, the real professionals like Hopkins found a way to work around the alphabet BS and still give the fans what they needed. They found a way to engage in elite-level boxing while still treating it like an actual sport with a real narrative and structural logic.

Now, the attitude among the top fighters is to work with the sanctioning bodies until it no longer serves their purposes to do so. Then, when they’ve built their names into something valuable enough to sell, they jump around, hand-picking the biggest fights available for the most short-term cash.

Unfortunately, the biggest fights are not always the best fights and in the understandable, but short-sighted goal of making as much money as possible in as short a time as possible, the young fighters, still struggling to make a name for themselves, find it harder and harder to get the push to the next level. Meanwhile the fringe guys, with nobody to eliminate them from the mix, hang around forever.

Titles vacated by established stars who want to chase after fights on the “celebrity boxing circuit,” get passed off to undeserving fringe contenders and young prospects who are not ready to compete at the elite level.

The end result is even more confusion as new champions come out of the woodwork and the sanctioning bodies, desperate to make their quota, issue more and more bogus titles. Of course, the hardcore fans know the score and know who the real champions are, but, with all the titles and champions floating around, it can’t be easy for new fans to jump aboard and understand what’s going on.

Case in point is the current state of the welterweight division.

In a division that arguably boasts boxing’s two best fighters, Manny Pacquiao and Floyd Mayweather, fringe guys like Vyacheslav Senchenko, Jan Zaveck and Soulemane M’Baye hold title belts while  unproven prospects like Kell Brook and Mike Jones stand on the verge of title glory. Without any sort of structure to the sport, the stars fight amongst themselves and never remove these pretenders from their undeservedly lofty spots. So, what we get is guys like Senchenko, Zaveck, M’Baye, Delvin Rodriguez, Selcuk Aydin, and Rafal Jackiewicz as perpetual members of the top 10, exchanging titles with one another until they decide to retire.

And while the visceral reaction among fight fans is to cheer the undermining of the sanctioning bodies, the fact of the matter is that boxing, thrown into the utter chaos of no governing structure, can’t survive as anything other than a fringe, niche sport. It would be like the Yankees, Dodgers, and Cubs being allowed to make their own schedules and veto any games they deemed too risky for too little reward.

The Boxing Tribune has long championed the goal of eliminating the current sanctioning organizations in favor of something more fair and reasonable, but it also has to be recognized that chaos is not a viable alternative.

The celebrity fights, instead of tightening the focus and helping the sport, have actually just created a greater pool of fighters claiming greatness and elite status. The current direction of the sport encourages catchweights and other shady moves that allow the top fighters to literally hand-pick their entire career path.

Boxing needs champions who will find a way to function within the existing framework, exposing the pretenders, fighting the contenders, and then working to unify the titles within the logical, reasonable boundaries of the weight class and the sport. That’s when the fighters re-seize control from the sanctioning bodies and that’s when the fighters could reasonably eliminate the alphabet soup organizations once and for all.

And that takes us back to Bernard Hopkins, the last fighter to actually go through the hard road of unifying an entire division.

This Saturday, he steps into the ring against WBC light heavyweight champ, Jean Pascal in Montreal. Win, lose, or draw, this may be the last time Bernard Hopkins steps into the ring as a combatant again and, one month shy of his 46th birthday, not much is expected from him.

Just keep in mind that when “The Executioner” finally retires, we will be losing the last fighter who actually treated boxing as a sport rather than a series of exhibitions.

Hopkins has made many enemies over the course of his 22 years in the business, but the one thing to always remember about him is that, when given the power and privilege of being an ambassador for the sport, he always treated boxing with the class and dignity it rightfully deserves.