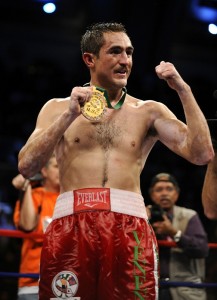 Fighting in his home town of Torreon, Coahuila, Rubio managed to get inside against the taller, longer Santana and slowly chip away at his inexperienced opponent.

Santana, whose eleven prior opponents sported a combined record of 5-45-3, fought back and tried to execute the right game plan of keeping the shorter Rubio on the outside with jabs and straight right hands, but lacked the experience and focus to control the space and pace of the fight.

Santana suffered a deep cut over his right eye from an accidental headbutt early in the fight and nearly went down from an offensive push by Rubio in the fifth.

Finally, a short right hand from Rubio in the eighth would drop Santana and convince the referee to call a halt to the contest.

After the fight, Rubio stated that he would be headed back to the middleweight division despite this bout being at the super middleweight limit of 168.