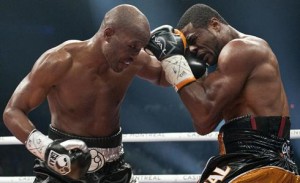 It looks like Pascal Hopkins 2 is on and, surprisingly, back in Canada. Chad Dawson will be on the undercard setting up a winner takes all bout later on this year. There are also rumours that Bhop now has a 3 fight HBO deal, which seems more than a little odd considering that since he defeated Pavlik, HBO wouldn’t go near B-hop with a barge pole.

Amir Khan will defend his title against Paul McCloskey at the MEN arena in April. Hopefully after this we can get a Super Fight between Khan and Bradley.

The highly-hyped UK fight between James Degale and George Groves may be off. Degale could face Sartison instead for his version of the WBA belt.

Ricardo Mayorga has been running his mouth off again. Despite the fact he is probably done as a fighter you cant help but laugh at his crazy antics. Mayorga, while being crude and offensive both inside and outside of the ring, reaches out to the casual audience and it will be a shame to see him go.

Marcos Maidana v Erik Morales? Please, for the love of God no. Morales could be seriously hurt if this goes ahead. He struggles with Willie Limond for crying out loud.

If you’re still one of those people that think the Alphabet soup is great then check out Dan Rafael’s latest article. He rips the WBC to shreds and points out exactly why these Alphabet bodies have no place in Boxing anymore.

Lets take a look at this week’s fights:

We kick this week off in Kobe Japan with Sithsamerci defending his WBC trinket against the highly rated Japanese prospect Kazuto Ioka. Despite only having 6 fights, the eight time national champion Ioka is considered a slight favourite in his home country, either way it should be a good fight for the hardcore among us.

Peter Quillin is back fighting another unworthy opponent, surely when you are 22-0 you should be looking at fighting someone ranked in the top 15 minimum?

David Rodriguez has a record most TV companies would dream of. He is 33-0 with 31 knockouts but most importantly he is American. Hang on… there is an unbeaten American KO artist who cant get on TV–doesn’t that say everything about his opposition?

Arthur Abraham is back in a tune up bout ahead of his Super 6 Semi Final against Andre Ward. He should win, but the two consecutive losses he has suffered and the manor of those defeats makes this an interesting fight.

On the same card, Yoan Pablo Hernadez takes on Steve Herelius and USS Steve Cunningham takes on Enid Lucina in a Cruiserweight bout. In all fairness to the Germans, they know how to stack a card. Should be well worth checking this one out.

That’s it for this week.