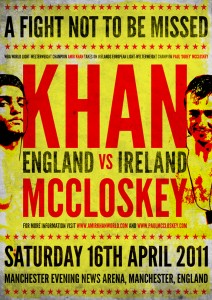 Citing a failure to secure a quality undercard, the upcoming Amir Khan-Paul McCloskey Sky Box Office pay-per-view telecast for April 16th has been moved to the free Sky Sports 3.

In the days leading up to the event at the M.E.N Arena in Manchester, two suitable co-features fell apart with middleweight, Matthew Macklin pulling out of his proposed bout with Khoren Gevor and the strongly-rumored Tyson Fury-Hasim Rahman heavyweight battle stalling in negotiations.

Still smarting from criticisms leveled at them for the widely-panned David Haye-Audley Harrison PPV last year, Sky Box Office canceled the planned broadcast based on the inferior overall quality of the card, which now features Tyson Fury and Rendall Munroe in lesser bouts, and a main event which many consider to be a mismatch.

The move to free TV, according to the Telegraph UK, will wind up costing Khan as much as 80% of his purse, losing a million of the 1.25 million pounds (UK) he was likely to make. McCloskey will also take a deep cut in his earnings.

In the US, Khan-McCloskey will be aired via tape delay on HBO as part of the Andre Berto-Victor Ortiz telecast.