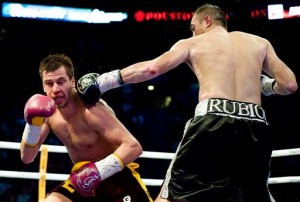 We’re used to seeing David Lemieux dispose of his opponents with brutal efficiency, handing them early-round stoppages and leaving judges’ scorecards filled with empty columns between “1” and whatever the scheduled fight distance was. Unfortunately, nobody told Marco Antonio Rubio he was supposed to fall down and stay down, as the veteran executed his game plan—survive early and take the fight to Lemieux as the fight went on—to perfection, showing in the process why he is the mandatory challenger to Sebastian Zbik’s version of the WBC middleweight title.

But this brings up a bigger question—what of the middleweight division itself? Before tonight’s festivities on ESPN, the general run of commentary was that Lemieux would dispose of the “shopworn” Rubio, give Zbik a schoolyard beatdown, then we’d all start talking about whether he would stick around to fight Sergio Martinez or move up to 168 and fight Lucian Bute in the biggest fight in the history of Canada. Clearly this angle is right out, at least until Lemieux grows up a bit as a fighter, learns how to take a punch, and maybe even fires trainer Russ Anber, who threw in the towel so quickly that one wonders if indeed Anber has no faith in his fighter when the opponent decides to fight back.

So what we’re left with is a Rubio fight against the winner of Zbik-Chavez, and neither Sebastian Zbik nor Julio Cesar Chavez Jr. are David Lemieux. Zbik is exactly the kind of fighter that Rubio has had trouble with and why the Mexican has five pro losses to begin with, including the KO loss to Kelly Pavlik that led ESPN’s Teddy Atlas to remark that Rubio can’t beat top-level competition. I’d give him a better shot against Chavez, but I’m entirely unconvinced that Chavez is going to beat Zbik. Everything about Chavez’s body of work thus far screams out exactly the same sort of puffed-up undefeated record that got everyone talking about the Canuck that Rubio just knocked out. The most impressive win on Junior’s record is a decision over John Duddy, not exactly a world-beater. So let’s for the sake of argument assume that form will hold on June 4.

Which, in turn, establishes nothing. Zbik beats Rubio, everyone points out that his WBC belt is a sham and that Sergio Martinez is the real champ, and we all go back to waiting for some up-and-coming fighter to establish himself or for David Lemieux to learn how to take a punch. Lather, rinse, repeat.

So what that pretty much means going forward is that we’ll be watching a lot of fights between guys who are either coming up from the lower weight divisions to campaign at 160 (Saul Alvarez and Paul Williams, both at junior middleweight right now and both younger than thirty, leap immediately to mind) or who have spent long careers campaigning at 160 pounds. Can David Lemieux crack that list? Not after what we all saw Friday night. Is Rubio the answer? I don’t know about anyone else, but I’d rather see him beat a proven fighter first before I say that.

So for all the noise made about this WBC title eliminator, it is a Shakespearean tale. Full of sound and fury, but I’ve got ten bucks that says “signifying nothing.” Now Zbik-Martinez, with the winner getting to punch Jose Sulaiman in the teeth for his absurd championship policy, THAT is a fight that needs to happen.